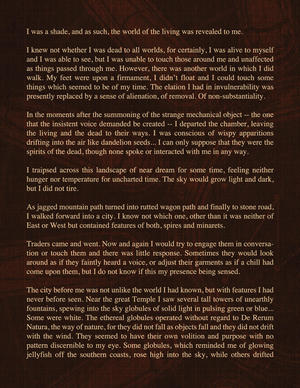 THE RETURN
February 8, 2017 · by PAC · in Intelligence and Other Media

Hank posted this document -- possibly an Obsidius journal entry or the Howcraft document he had been seeking, or perhaps both -- just a few moments ago.

He provided no additional context, just these images.

In a private message to me he shared the transcript of these documents, which I am including below:

I was a shade, and as such, the world of the living was revealed to me.

I knew not whether I was dead to all worlds, for certainly, I was alive to myself and I was able to see, but I was unable to touch those around me and unaffected as things passed through me. However, there was another world in which I did walk. My feet were upon a firmament, I didn't float and I could touch some things which seemed to be of my time. The elation I had in invulnerability was presently replaced by a sense of alienation, of removal. Of non-substantiality.

In the moments after the summoning of the strange mechanical object -- the one that the insistent voice demanded be created -- I departed the chamber, leaving the living and the dead to their ways. I was conscious of wispy apparitions drifting into the air like dandelion seeds... I can only suppose that they were the spirits of the dead, though none spoke or interacted with me in any way.

I traipsed across this landscape of near dream for some time, feeling neither hunger nor temperature for uncharted time. The sky would grow light and dark, but I did not tire.

As jagged mountain path turned into rutted wagon path and finally to stone road, I walked forward into a city. I know not which one, other than it was neither of East or West but contained features of both, spires and minarets.

Traders came and went. Now and again I would try to engage them in conversation or touch them and there was little response. Sometimes they would look around as if they faintly heard a voice, or adjust their garments as if a chill had come upon them, but I do not know if this my presence being sensed.

The city before me was not unlike the world I had known, but with features I had never before seen. Near the great Temple I saw several tall towers of unearthly fountains, spewing into the sky globules of solid light in pulsing green or blue... Some were white. The ethereal globules operated without regard to De Rerum Natura, the way of nature, for they did not fall as objects fall and they did not drift with the wind. They seemed to have their own volition and purpose with no pattern discernible to my eye. Some globules, which reminded me of glowing jellyfish off the southern coasts, rose high into the sky, while others drifted towards the ground and sometimes intersected with people at the temples and in the bazaars... 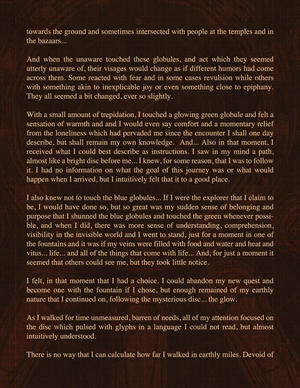 And when the unaware touched these globules, and act which they seemed utterly unaware of, their visages would change as if different humors had come across them. Some reacted with fear and in some cases revulsion while others with something akin to inexplicable joy or even something close to epiphany. They all seemed a bit changed, ever so slightly.

With a small amount of trepidation, I touched a glowing green globule and felt a sensation of warmth and and I would even say comfort and a momentary relief from the loneliness which had pervaded me since the encounter I shall one day describe, but shall remain my own knowledge. And... Also in that moment, I received what I could best describe as instructions. I saw in my mind a path, almost like a bright disc before me... I knew, for some reason, that I was to follow it. I had no information on what the goal of this journey was or what would happen when I arrived, but I intuitively felt that it to a good place.

I also knew not to touch the blue globules... If I were the explorer that I claim to be, I would have done so, but so great was my sudden sense of belonging and purpose that I shunned the blue globules and touched the green whenever possible, and when I did, there was more sense of understanding, comprehension, visibility in the invisible world and I went to stand, just for a moment in one of the fountains and it was if my veins were filled with food and water and heat and vitus... life... and all of the things that come with life... And, for just a moment it seemed that others could see me, but they took little notice.

I felt, in that moment that I had a choice. I could abandon my new quest and become one with the fountain if I chose, but enough remained of my earthly nature that I continued on, following the mysterious disc... the glow.

As I walked for time unmeasured, barren of needs, all of my attention focused on the disc which pulsed with glyphs in a language I could not read, but almost intuitively understood. 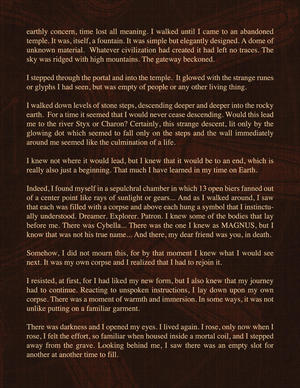 There is no way that I can calculate how far I walked in earthly miles. Devoid of earthly concern, time lost all meaning. I walked until I came to an abandoned temple. It was, itself, a fountain. It was simple but elegantly designed. A dome of unknown material. Whatever civilization had created it had left no traces. The sky was ridged with high mountains. The gateway beckoned.

I stepped through the portal and into the temple. It glowed with the strange runes or glyphs I had seen, but was empty of people or any other living thing.

I walked down levels of stone steps, descending deeper and deeper into the rocky earth. For a time it seemed that I would never cease descending. Would this lead me to the river Styx or Charon? Certainly, this strange descent, lit only by the glowing dot which seemed to fall only on the steps and the wall immediately around me seemed like the culmination of a life.

I knew not where it would lead, but I knew that it would be to an end, which is really also just a beginning. That much I have learned in my time on Earth.

Indeed, I found myself in a sepulchral chamber in which 13 open biers fanned out of a center point like rays of sunlight or gears... And as I walked around, I saw that each was filled with a corpse and above each hung a symbol that I instinctually understood. Dreamer. Explorer. Patron. I knew some of the bodies that lay before me. There was Cybella... There was the one I knew as MAGNUS, but I know that was not his true name... And there, my dear friend was you, in death.

Somehow, I did not mourn this, for by that moment I knew what I would see next. It was my own corpse and I realized that I had to rejoin it.

I resisted, at first, for I had liked my new form, but I also knew that my journey had to continue. Reacting to unspoken instructions, I lay down upon my own corpse. There was a moment of warmth and immersion. In some ways, it was not unlike putting on a familiar garment.

There was darkness and I opened my eyes. I lived again. I rose, only now when I rose, I felt the effort, so familiar when housed inside a mortal coil, and I stepped away from the grave. Looking behind me, I saw there was an empty slot for another at another time to fill.

posted by Hank Johnson via Google+

H. Richard Loeb
2017/02/09 15:21
Hank posted this document -- possibly an Obsidius journal entry or the Howcraft document he had been seeking, or perhaps both -- just a few moments ago. He provided no additional context, just these images.