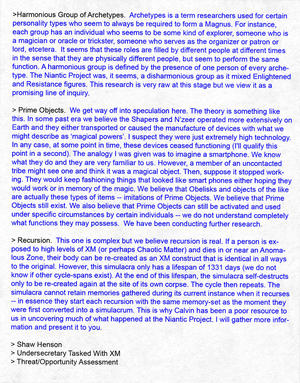 HARMONY AND DISCORD
February 4, 2017 · by PAC · in Intelligence and Other Media

Here are the remaining definitions -- the second page of the email between Jay Phillips and Shaw Henson that initially surfaced yesterday.

Over the last week or so, much of these conversations have come to light -- they are an excellent review of the current zeitgeist when it comes to the world of XM (and for those who are deeper into the investigation, a reminder that we may in fact may be ahead of the intel agencies on some fronts...)
ijo21qdbtqrhnm184lp

> Harmonious Group of Archetypes. Archetypes is a term researchers used for certain personality types who seem to always be required to form a Magnus. For instance, each group has an individual who seems to be some kind of explorer, someone who is a magician or oracle or trickster, someone who serves as the organizer or patron or lord, etcetera. It seems that these roles are filled by different people at different times in the sense that they are physically different people, but seem to perform the same function. A harmonious group is defined by the presence of one person of every arche­type. The Niantic Project was, it seems, a disharmonious group as it mixed Enlightened and Resistance figures. This research is very raw at this stage but we view it as a promising line of inquiry.

> Prime Objects. We get way off into speculation here. The theory is something like this. In some past era we believe the Shapers and N'zeer operated more extensively on Earth and they either transported or caused the manufacture of devices with what we might describe as 'magical powers'. I suspect they were just extremely high technology. In any case, at some point in time, these devices ceased functioning (I'll qualify this point in a second). The analogy I was given was to imagine a smartphone. We know what they do and they are very familiar to us. However, a member of an uncontacted tribe might see one and think it was a magical object. Then, suppose it stopped work­ing. They would keep fashioning things that looked like smart phones either hoping they would work or in memory of the magic. We believe that Obelisks and objects of the like are actually these types of items --imitations of Prime Objects. We believe that Prime Objects still exist. We also believe that Prime Objects can still be activated and used
under specific circumstances by certain individuals --we do not understand completely what functions they may possess. We have been conducting further research.

> Recursion. This one is complex but we believe recursion is real. If a person is ex­posed to high levels of XM (or perhaps Chaotic Matter) and dies in or near an Anoma­lous Zone, their body can be re-created as an XM construct that is identical in all ways to the original. However, this simulacra only has a lifespan of 1331 days (we do not know if other cycle-spans exist). At the end of this lifespan, the simulacra self-destructs only to be re-created again at the site of its own corpse. The cycle then repeats. The simulacra cannot retain memories gathered during its current instance when it recurses --in essence they start each recursion with the same memory-set as the moment they were first converted into a ·simulacrum. This is why Calvin has been a poor resource to us in uncovering much of what happened at the Niantic Project. I will gather more infor­mation and present it to you.

H. Richard Loeb
2017/02/04 18:04
Here are the remaining definitions -- the second page of the email between Jay Phillips and Shaw Henson that initially surfaced yesterday.