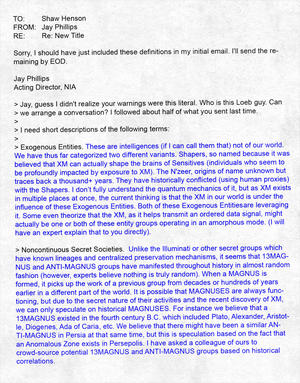 EXOGENOUS ENTITIES
February 3, 2017 · by PAC · in Intelligence and Other Media

A few definitions here that help shed the light on the leaked email that emerged yesterday.

As for this 'conversation' that Shaw Henson seems to want to have with me. Not sure I want to have that talk... I've had conversations with intelligence groups before -- they tend to only want to meet on their own, very specific, terms.
mcnvclmwdwwdewnyldvw
blveevvmvxvdcwmwllvbm

TO: Shaw Henson
FROM: Jay Phillips
RE: Re: New Title

Sorry, I should have just included these definitions in my initial email. I'll send the remaining by EOD.

> Jay, guess I didn't realize your warnings were this literal. Who is this Loeb guy. Can we arrange a conversation? I followed about half of what you sent last time.
>
> I need short descriptions of the following terms:
>
> Exogenous Entities. These are intelligences (if I can call them that) not of our world. We have thus far categorized two different variants. Shapers, so named because it was believed that XM can actually shape the brains of Sensitives (individuals who seem to be profoundly impacted by exposure to XM). The N'zeer, origins of name unknown but traces back a thousand+ years. They have historically conflicted (usi·ng human proxies) with the Shapers. I don't fully understand the quantum mechanics of it, but as XM exists in multiple places at once, the current thinking is that the XM in our world is under the influence of these Exogenous Entities. Both of these Exogenous Entitiesare leveraging it. Some even theorize that the XM, as it helps transmit an ordered data signal, might actually be one or both of these entity groups operating in an amorphous mode. (I will have an expert explain that to you directly).

> Noncontinuous Secret Societies. Unlike the Illuminati or other secret groups which have known lineages and centralized preservation mechanisms, it seems that 13MAGNUS and ANTI-MAGNUS groups have manifested throughout history in almost random fashion (however, experts believe nothing is truly random). When a MAGNUS is formed, it picks up the work of a previous group from decades or hundreds of years earlier in a different part of the world. It is possible that MAGNUSES are always functioning, but due to the secret nature of their activities and the recent discovery of XM, we can only speculate on historical MAGNUSES. For instance we believe that a
13MAGNUS existed in the fourth century B.C. which included Plato, Alexander, Aristotle, Diogenes, Ada of Caria, etc. We believe that there might have been a similar ANTI-MAGNUS in Persia at that same time, but this is speculation based on the fact that an Anomalous Zone exists in Persepolis. I have asked a colleague of ours to crowd-source potential 13MAGNUS and ANTI-MAGNUS groups based on historical
correlations.

H. Richard Loeb
2017/02/03 19:05
A few definitions here that help shed the light on the leaked email that emerged yesterday. As for this 'conversation' that Shaw Henson seems to want to have with me. Not sure I want to have that talk...