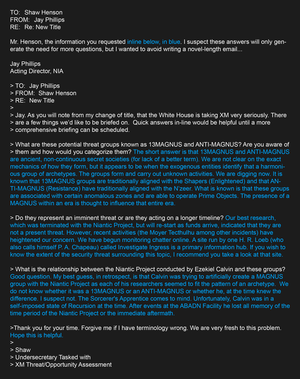 MAGNUSES AND ARCHETYPES
February 1, 2017 · by PAC · in Intelligence and Other Media

Oh, Shaw Henson. You're about to fall into a rabbithole that has no bottom, if you ever need an assist, pick a good pseudonym and come join us in the comment section -- there's folks here that can dance circles around your best people while blindfolded...
72apon6tipce2dewzm9

Thanks for the shoutout, Jay. Good to know our work continues to be a resource for you all..
V11JHM0907FTE11OVDUdOUZB

TO: Shaw Henson
FROM: Jay Phillips
RE: Re:New Title

Mr. Henson, the information you requested inline below, in blue. I suspect these answers will only generate the need for more questions, but I wanted to avoid writing a novel-length email...

>
TO: Jay Phillips
FROM: Shaw Henson
RE: New Title
>
Jay. As you will note from my change of title, that the White House is taking XM very seriously. There are a few things we'd like to be briefed on. Quick answers in-line would be helpful until a more comprehensive briefing can be scheduled

> What are these potential threat groups known as 13MAGNUS and ANTI-MAGNUS? Are you aware of them and how would you categorize them? The short answer is that 13MAGNUS and ANTI-MAGNUS are ancient, non-continuous secret spcoetoes (for lack of a better term). We are not clear on the exact mechanics of how they form, but it appears to be when the exogenous entities identify that a harmonious group of archetypes. The groups form and carry out unknown activities. We are digging now. It is known that 13MAGNUS groups are traditionally aligned with the Shapers (Enlightened) and that ANTI-MAGNUS (Resistance) have traditionally aligned with the N'zeer. What is known is that these groups are associated with certain anomalous zones and are able to operate Prime Objects. The presence of a MAGNUS within an era is thought to influence that entire era.

> Do they represent an imminent threat or are they acting on a longer timeline? Our best research, which was terminated with the Niantic Project, but will re-start as funds arrive, indicated that they are not a present threat. However, recent activities (the Moyer-Tecthulhu among other incidents) have heightened our concern. We have begun monitoring chatter online. A site run by one H.R. Loeb (who also calls himself P.A. Chapeau) called Investigate Ingress is a primary information hub. If you wish to know the extent of the security threat surrounding this topic, I recommend you take a look at that site.

> What is the relationship between the Niantic Project conducted by Ezekiel Calvin and these groups? Good question. My best guess, in retrospect, is that Calvin was trying to artificially create a MAGNUS group with the Niantic Project as each of his researchers seemed to fit the pattern of an archetype. We do not know whether it was a 13MAGNUS or an ANTI-MAGNUS or whether he, at the time knew the difference. I suspect not. The Sorcerer's Apprentice comes to mind. Unfortunately, Calvin was in a self-imposed state of Recursion at the time. After events at the ABADN Facility he lost all memory of the time period of the Niantic Project or the immediate aftermath.

> Thank you for your time. Forgive me if I have teminology wrong. We are very fresh to this problem. Hope this is helpful.
>
>Shaw
>Undersecretary Task with
>XM Threat/Opportunity Assessment

H. Richard Loeb
2017/02/02 15:17
Oh, Shaw Henson. You're about to fall into a rabbithole that has no bottom, if you ever need an assist, pick a good pseudonym and come join us in the comment section -- there's folks here that can dance circles around your best people while blindfolded...