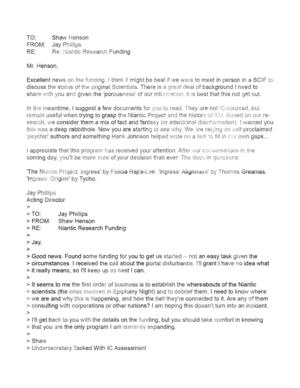 This leaked series of emails may help shed some light on the unverifiable document we found yesterday...

It seems even at high levels in the Intel Community, people are paying attention to this 'Portal disturbance.'

The documents Jay Phillips mentioned can be found in a few different places: Here (for the Hajra-Lee and Greanias documents) and here (for the Tycho document).

TO: Shaw Henson
FROM: Jay Phillips
RE: Re: Niantic Research Funding

Excellent news on the funding. I think it might be best if we were to meet in person in a SCIF to discuss the status of the original Scientists. There is a great deal of background I need to share with you and given the 'porousness' of our information, it is best that this not get out.

In the meantime, I suggest a few documents for you to read. They are not IC-sourced, but remain useful when trying to grasp the Niantic Project and the history of XM. Based on our research, we consider them a mix of fact and fantasy (or intentional disinformation), I warned you this was a deep rabbithole. Now you are starting to see why. We are relying on self-proclaimed 'psychic' authors and something Hank Johnson helped write on a lark to fill in our own gaps...

I appreciate that this program has received your attention. After our conversations in the coming day, you'll be more sure of your decision than ever. The docs in questions:

Jay Phillips
Acting Director
>
TO: Jay Phillips
FROM: Shaw Henson
RE: Niantic Research Funding
>
Jay,
>
Good news. Found some funding for you to get us started -- not an easy task given the circumstances. I received the call about the portal disturbance. I'll grant I have no idea what it really means, so I'll keep up as best I can.
>
It seems to me the first order of business is to establish the whereabouts of the Niantic scientists (the ones involved in Epiphany Night) and to debrief them. I need to know where we are and why this is happening, and how the hell they're connected to it. Are any of them consulting with corporations or other nations? I am hoping this doesn't turn into an incident.
>
I'll get back to you with the details on the funding, but you should take comfort in knowing that you are the only program I am currently expanding.
>
Shaw
Undersecretary Tasked With IC Assessment

H. Richard Loeb
2017/02/01 16:30
This leaked series of emails may help shed some light on the unverifiable document we found yesterday... It seems even at high levels in the Intel Community, people are paying attention to this 'Portal disturbance.'