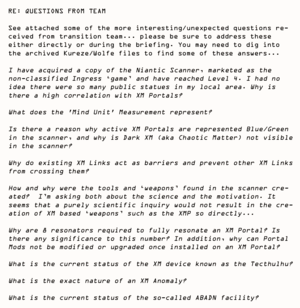 INQUISITIVE MINDS
January 21, 2017 · by PAC · in Intelligence and Other Media

RE: QUESTIONS FROM TEAM

See attached some of the more interesting/unexpected questions received from transition team... please be sure to address these either directly or during the briefing. You may need to dig into the archived Kureze/Wolfe files to find some of these answers...

I have acquired a copy of the Niantic Scanner, marketed as the non-classified Ingress 'game' and have reached Level 4. I had no idea there were so many public statues in my local area. Why is there a high correlation with XM Portals?

What does the 'Mind Unit' Measurement represent?

Is there a reason why active XM Portals are represented Blue/Green in the scanner, and why is Dark XM (aka Chaotic Matter) not visible in the scanner?

Why do existing XM Links act as barriers and prevent other XM Links from crossing them?

How and why were the tools and 'weapons' found in the scanner created? I'm asking both about the science and the motivation. It seems that a purely scientific inquiry would not result in the creation of XM based 'weapons' such as the XMP so directly...

Why are 8 resonators required to fully resonate an XM Portal? Is there any significance to this number? In addition, why can Portal Mods not be modified or upgraded once installed on an XM Portal?

What is the current status of the XM device known as the Tecthulhu?

What is the exact nature of an XM Anomaly?

What is the current status of the so-called ABADN facility?

H. Richard Loeb
2017/01/21 22:39:09
A leaked email revealing some of the questions sent to the NIA by the government officials requesting a briefing on the current status of XM research. Quite a few interesting ones -- including some I'd be curious to learn about myself...