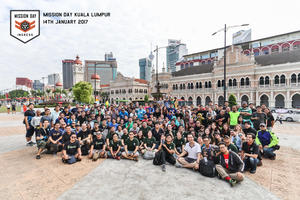 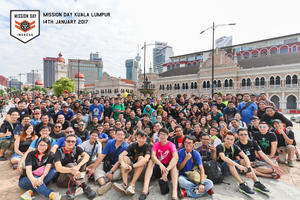 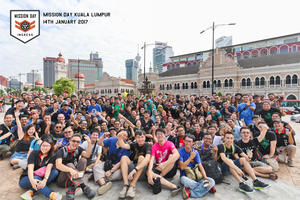 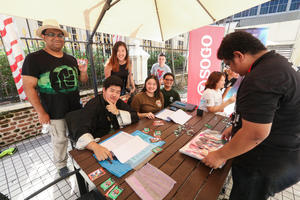 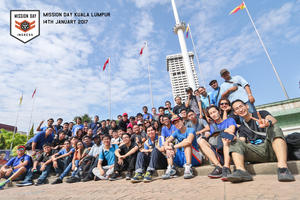 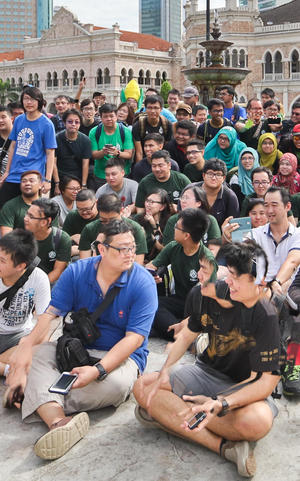 Ingress
2017/01/18 01:54:03
Great turn out in Kuala Lumpur this weekend! Mission Days are a great way to explore and celebrate the history that a city has to offer with friends from both factions.

Walker Ng
2017/01/16
On such auspicious of day, the very first Mission May was held in Malaysia. All ingress agents from around Malaysia came over to complete at least 6 mission to claim the Mission Day Badge. There were also overseas agents who came over to participate. Singapore, Indonesia, Taiwan, Japan, just to name a few. To start it off, we had this group photo at a historical location - Dataran Merdeka.

All in all, I manage to finish up all 18 mission with my fellow agents.

In usual time, we only see agents name appearing everywhere we go, but this was such a nice time to meet up with agents from both faction, even from different countries. Such events, bring people together under common goals. To me, this matter most.

It's also a great time to trade up some biocards along the way. If you guys/gals are interested in trading with me, I would love to do so.

As a summary of whole day trip, we started close to 8am at KL Sentral, National Museum, National Mosque, KL Railway Station and stop by Dataran Merdeka to finish up those missions around there, namely Dataran Merdeka itself, Sultan Abdul Samad Building, Royal Selangor Club, Masjid Jamek, and Masjid India. Have to pause to arrange time for the photo session. Time was around 10.30am as most agents will gather there for the photo session. Every one waited patiently under the hot sun, while the photo arrangement was done to ensure everyone is seen in the photo. Did my best with the help of #K9krol & #Berbacat help guiding the people. Successfully captured the group photos and move on for the next mission. Then the new of the dead drop came into the group chat. We move to the spot where we expect the photo spots to be at. We search around national mosque and KL Railway Station. Sadly we fail to find any dead drop. Feeling hungry we went on to complete another mission - Central Market and break for lunch at Texas Chicken. Great to be able to rest our legs abit.

Resumed missions with the Petaling Street and Jalan Tuanku Abdul Rahman before getting back at the starting point. Waited for some #Swag by #Mandomerc #strykeryder. We then quickly move on to Taman Eco Rimba to only know that we can climb all the way up to hack all portals, and ended up at KL Tower. There on we rush to Jalan Alor, Bintang Walk, Aquaria KLCC and finally KLCC itself. We disperse at KLCC while some of us stay on for dinner at Avenue K food court.

We were glad to finish the 18 missions and it has to do a lot with proper planning. Understanding the best route that we can take. It's not like we can ask Waze to give us the best route to all 18 missions, but I did some planning by analyzing the mission maps. To understand what are the challenging portal that we may have problem facing. The fun fact was, that was only doable after 12am midnight once the mission was released. I fired up the Intel map to screen shot those missions for reference. At least I have a clear idea where we are heading to. Surely, Other material also helps out, especially the guide prepared by #Berbacat. And, staying in KL has it perks. :)

For the whole photoseries - https://www.instagram.com/p/BPPoKFdjf3S/?taken-by=miutifuls