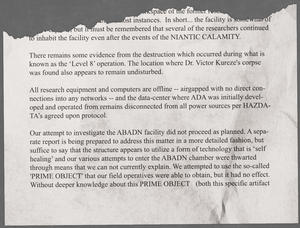 I've been able to obtain another fragment of the report about the Niantic Facility... my source tells me there's more coming. Will share more when I can...yeqa32iov34dwo7

See the first fragment we were able to recover here.

There remains some evidence from the destruction which occurred during what is known as the "Level 8" operation. The location whare Dr. Victor Kreze's corpse was found also appears to remain undisturbed.

All research equipment and computers are offline -- airgapped with no direct connections into any networks -- and the data-center where ADA was initially developed and operated from remain disconnected from all power sources per HAZ DATA's agreed upon protocol.

Our attempt to investigate the ABADN facility did not proceed as planned. Aseparete report is being prepared to address this matter in a more detailed fashion, but suffice to say that the structure appears to utilize a form of technology that is 'self-healing' and our various attempt to enter the ABADN chamber ware thwarted through means that we can not currently expain. We attempted to use the so-called 'PRIME OBJECT' that our field operatives were able to obtain, but it had no effect. Without deer knowledge about this PRIME OBJECT ( both this specifice artfact