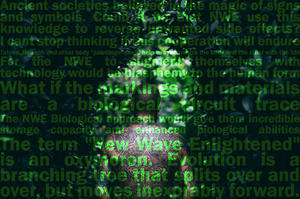 THE NEW WAVE ENLIGHTENED: YOUR OBSERVATIONS
January 4, 2017 · by PAC · in Commentary

A few days ago I shared why I had gone out on a limb to suggest that New Wave Enlightened (NWE) were present at the Portal creation ceremony on New Year's. Many of you shared some incredibly astute observations that I felt deserved highlighting.

Circuits or traces can actually be made with all sorts of materials (just finished a unit on paper circuits as an intro to wearable tech for my students). What if the markings and materials are a biological circuit trace - to enhance not a "digital electrical" transfer, but a transfer of another kind? A biological connected type.

Tattoos were used more than 5000 years ago to heal wounds. Even iceman Otzi had 61 tattoos all over his body. Ancient societies believed in the magic of signs and symbols. Could it be that NWE use this knowledge to reverse unwanted side effects?

NWR is a fast augmentation which can interface better with our existing tech, but the NWE Biological approach would give them incredible storage capacity and enhanced biological abilities. We could be seeing people of the same mindset leveraging the best of what both factions can offer to reach a common goal.

My lil penny into the pot is that yes, the green one was a member of NWEnl. This is good, on an hand, 'cause shows clearly that working togheter is possible for factions. On the other i cant stop thinking if this cooperation will endure...

I work as a Henna artist for 10 years now and ... I have come to the conclusion that with glyphs and the knowledge of traditional body adornment (such as Henna, mendhi, tattoo and others) one could probably obtain the ability to synchronise with the portals as ancient civilisations did in their way to achieve "enlightment".

The Acolyte once stated that for the NWE to augment themselves with technology would be blasphemy to the human form. I suspect their augmentation would resemble something along the lines of the visual augmentation that happened to Carrie Campbell

Based on what we know about Tecthulhu, many of these New Wavers could actually be simulacra or XM entities. No longer merely biological beings.

The technology of the NWR would enable them to connect to outside networks and the AI that they embrace. But I wonder if the "biological circuitry" utilized by the NWE could provide a much more powerful connection, opening the NWE agents to XM, which is ordered data after all.

I don't think NWE would advertise themselves aggressively, the influence would be delicate, emerging here and there and vanishing before perceived.

Tatoos, Hennah and other body "paintings" could help to synchronize the body and the mind with the XM.

The term "New Wave Enlightened" is an oxymoron. Evolution is a branching tree that splits over and over, but moves inexorably forward. This represents simply another branch of humanity's embrace of XM and the capabilities it affords. There is no "New Wave" on the path of the Enlightened. Simply a new branch and a new leaf.
羊レ尺几工んモ了廾尺ヨ巨丁ら廿片凡
己丹卞井尺巳モ乍工レ臣乍亜レ巨互甲

Thanks, as always, to those who are enriching this Investigation with their contributions -- I'm continually amazed by the level of awareness and understanding in the commentary...

H. Richard Loeb
2017/01/05 15:03:58
A few days ago I shared why I had gone out on a limb to suggest that New Wave Enlightened (NWE) were present at the Portal creation ceremony on New Year's. Many of you shared some incredibly astute observations that I felt deserved highlighting.