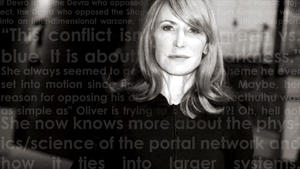 A number of you weighed in on the questions I shared yesterday with some incredibly astute responses. Here were my favorite thoughts -- extracted from the comments:

People seem to forget that Devra and OLW never saw eye to eye. She always seemed to go against every scheme he ever set into motion since their time at Niantic. Maybe, her reason for opposing his attempt to build a tecthulhu was as simple as "Oliver is trying to do what?!?! Oh, hell no!"

It might be helpful to recover Devra's quote during Via Noir: "This conflict isn't about green vs. blue. It is about light vs. darkness."

Maybe she saw that eventually, Tecthulu will turn all human beings to simulacra in order to replicate itself?And Devra, being true to herself in protecting humanity decided she needed to act to stop +Oliver Lynton-Wolfe​​? Yes, it's likely +Hubert Farlowe​​ was involved.

During her videos you could see remorse for past actions. It may be that she wants to make amends for things.
gmdcbfiojuerteoidgihbtnfiimvdebsieevgeentioidihbetbp

She admits she made a mistake about influencing the portal network as a whole and why she was there -to make amends and perhaps stop OLW from doing the same - ...

I also wonder if she now knows more about the physics/science of the portal network and how it ties into larger systems.

Thanks to all who participated in this discussion -- it's been a good exercise, and I think I'll work with Dr. Wright to host a few more...

H. Richard Loeb
2016/11/27 14:11:33
A number of you weighed in on the questions I shared yesterday with some incredibly astute responses. Here were my favorite thoughts -- extracted from the comments...