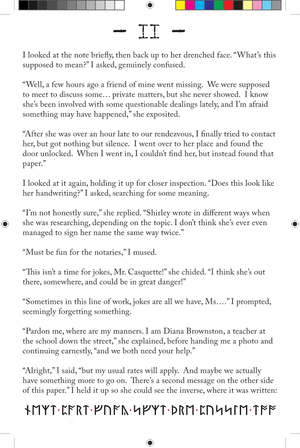 Verum Inveniri
2016/11/05 17:30:32
#VINoir is a puzzle in ten and one parts, and one Agent has seemingly claimed the first. We are glad to see that it was sufficiently enigmatic.

I look at the note briefly, then back up to her drenched face. "What's this supposed to mean?" I asked, genuinely confused.

"Well, a few hours ago a friend of mine went missing. We were supposed to meet to discuss some ... private matters, but she never showed. I know she's been involved with some questionable dealings lately, and I'm afraid something may have happened," she exposited.

"After she was over an hour late to our rendezvous, I finally tried to contact her, but got nothing but silence. I went over to her place and found the door unlocked. When I went in, I couldn't find her, but instead found that paper."

I looked at it again, holding it up for closer inspection. "Does this look like her handwriting?" I asked, searching for some meaning.

"I'm not honestly sure," she replied. "Shirley wrote in different ways when she was researching, depending on the topic. I don't think she's ever even managed to sign her name the same way twice."

"Must be fun for the notaries," I mused.

"This isn't a time for jokes, Mr.Casquette!" she chided. "I think she's out there, somewhere, and could be in great danger!"

"Sometimes in this line of work, jokes are all we have, Ms ..." I prompted, seemingly forgetting something.

"Pardon me, where are my manners. I am Diana Brownston, a teacher at the school down the street, "she explained, before handing me a photo and continuing earnestly," and we both need your help."

"Alright," I said, "but my usual rates will apply. And maybe we actually have something more to go on. There's a second message on the other side of this paper." I held it up so she could see the inverse, where it was written: