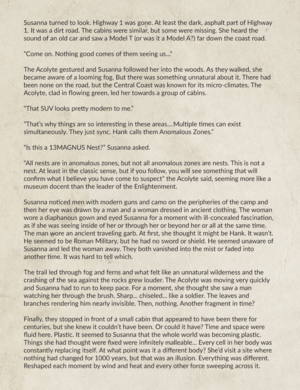 Agents from around the world helped recover this -- from India to Peru to Norway to Istanbul and myriad locations in between.

These two posts, created by Operation Essex Investigators Jennifer Pisano and Dawid Jabluszewski help identify and thank the many Agents and Investigators who helped crack this puzzle and bring this important document to the surface.
ocehoccerrgocccrerorekoforeoorrzogocerrrroccrrl

More of Susanna's interactions at the Acolyte's compound have now come to light -- and we all know what was in that cabin -- but how did that affect Susanna's mission and her journey? I suspect we'll find out soon.

Susanna turned to look. Highway 1 was gone. At least the dark, asphalt part of Highway 1. It was a dirt road. The cabins were similar, but some were missing. She heard the sound of an old car and a Model T(or was it a Model A?) far down the coast road.

"Come on. Nothing good comes of them seeing us ..."

The Acolyte gestured and Susanna followed her into the woods. As they walked, she became aware of a looming fog. But there was something unnatural about it. There had been none on the road, but the Central Coast was known for its micro-climates. The Acolyte, clad in flowing green, led her towards a group of cabins.

"That SUV looks pretty modern to me."

"That's why things are so interesting in these areas ... Multiple times can exist simultaneously. They just sync. Hank calls them Anomalous Zones."

"Is this a 13MAGNUS Nest?" Susanna asked.

"All nests are in anomalous zones, but not all anomalous zones are nests. This is not a nest. At least in the classic sense, but if you follow, you will see something that will confirm what I believe you have come to suspect" the Acolyte said, seeming more like a museum docent than the leader of the Enlightenment.

Susanna noticed men with modern guns and camo on the peripheries of the camp and then her eye was drawn by a man and a woman dressed in ancient clothing. The woman wore a diaphanous gown and eyed Susanna for a moment with ill-concealed fascination, as if she was seeing inside of her or through her or beyond her of all at the same time. The man wore an ancient traveling garb. At first, she thought it might be Hank. It wasn't. Susanna and led the woman away. They both vanished into the mist of faded into another time. It was hard to tell which.

The trail led through fog and ferns and what felt like an unnatural wilderness and the crashing of the sea against the rocks grew louder. The Acolyte was moving very quickly and Susanna had to run to keep pace. For a moment, she thought she saw a man watching her through the brush. Sharp ... chiseled ... like a soldier. The leaves and branches rendering him nearly invisible. Then, nothing. Another fragment in time?

Finally, they stopped in front of a small cabin that appeared to have been there for centuries, but she knew it couldn't have been. Or could it have? Time and space were fluid here. Plastic. It seemed to Susanna that the whole world was becoming plastic. Things she had thought were fixed were infinitely malleable ... Every cell in her body was constantly replacing itself. At what point was it a different body? She'd visit a site where nothing had changed for 1000 years, but that was an illusion. Everything was different. Reshaped each moment by wind and heat and every other forcce sweeping across it.

H. Richard Loeb
2016/10/22 13:10:45
Agents from around the world helped recover this -- from India to Peru to Norway to Istanbul and myriad locations in between. More of Susanna's interactions at the Acolyte's compound have now come to light -- and we all know what was in that cabin -- but...