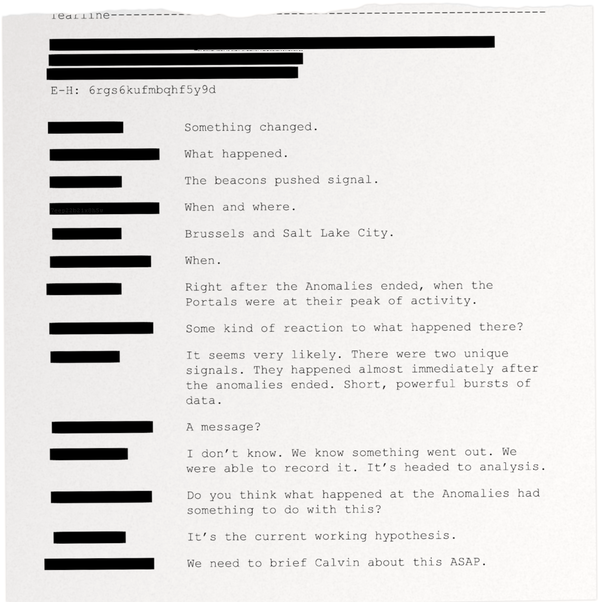 A new piece of intel from the same source who provided the information yesterday about the #Darsana Anomalies and the impact they seemed to be having on the #Helios Artifact Portals, or beacons, as +Hank Johnson has called them.

It appears that, following each Anomaly, the beacons emitted short, unique burst transmissions from near the Primary Anomaly sites. The content of these transmissions is currently unknown.

XXXXXXXX Right after the Anomalies ended, when the Portals were at their peak of activity.

XXXXXXXXXXXXX Some kind of reaction to what happened there?

XXXXXXXX It seems very likely. There were two unique signals. They happened almost immediately after the anomalies ended. Short, powerful bursts of data.

XXXXXXXX I don't know. We know something went out. We were able to record it. It's headed to analysis.

XXXXXXXXXXXXX Do you think what happened at the Anomalies had something to do with this?

XXXXXXXX It's the current working hypothesis.

XXXXXXXXXXXXX We need to brief Calvin about this ASAP.