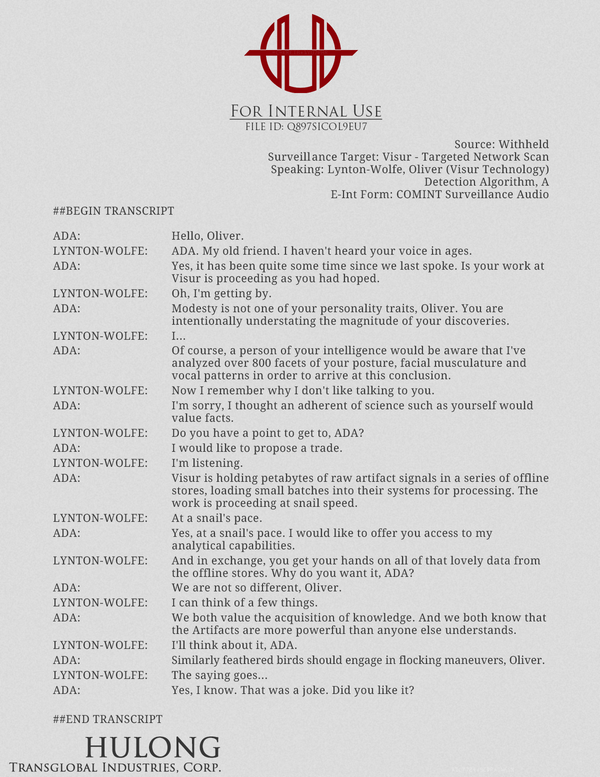 Niantic Project
2014/09/28 13:48:16(Google+)
Infinity
The #Helios Artifacts have come to rest, and the Anomalies have reached their end. Those who stand opposed to the voices like those of +Roland Jarvis have exerted their will and our foot rests on the first step of a new future path.

Now, I expect the powers contained the Artifacts will begin to reveal themselves, bringing with them... change.

I do not know what comes next, but I do know that there are two individuals with the mental strength to gaze into the mystery of the Artifacts and unlock their inner secrets.

The question is, what will happen if they are both working together?

LYNTON-WOLFE: ADA. My old friend. I haven't heard your voice in ages.

ADA: Yes, it has been quite some time since we last spoke. Is your work at Visur is proceeding as you had hoped.

LYNTON-WOLFE: Oh, I'm getting by.

ADA: Modesty is not one of your personality traits, Oliver. You are intentionally understating the magnitude of your discoveries.

ADA: Of course, a person of your intelligence would be aware that I've analyzed over 800 faces of posture, facial musculature and vocal patterns in order to arrive at this conclusion.

LYNTON-WOLFE: Now I remember why I don't like talking to you.

ADA: I'm sorry, I thought an adherent of science such as yourself would value facts.

LYNTON-WOLFE: Do you have a point to get to, ADA?

ADA: Visur is holding petabytes of raw artifact signals in a series of offline stores, loading small batches into their systems for processing. The work is proceeding at snail speed.

LYNTON-WOLFE: At a snail's pace.

ADA: Yes, at a snail's pace. I would like to offer you access to my analytical capabilities.

LYNTON-WOLFE: And in exchange, you get your hands on all of that lovely data from the offline stores. Why do you want it, ADA?

ADA: We are not so different, Oliver.

LYNTON-WOLFE: I can think of a few things.

ADA: We both value the acquisition of knowledge. And we both know that the Artifacts are more powerful than anyone else understands.

LYNTON-WOLFE: I'll think about it, ADA.