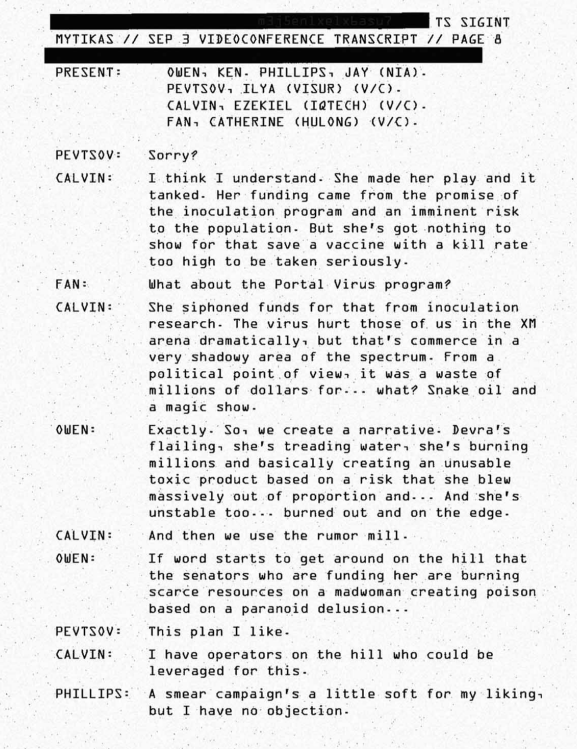 Not directly, but by proxy... by attacking those whose political support enabled her to take refuge in and begin inoculation research at the CDC in the first place.

It's a dirty game at the top, and the people in this room (or connected to it by videoconference) seem to play it with practiced ease.

OWEN: Thank you for the update, Dr. Schubert.

FAN: Why do we keep avoiding the elephant in the room?

FAN: When are we going to discuss fixing the Bogdanovich problem.

CALVIN: It was a longshot. Didn't pan out.

FAN: Where is she getting her funding?

OWEN: She has a number of backers on Capitol Hill. She convinced them XM was a clear and present danger, got them scared enough to unblock a large chunk of biodefense research money.

PEVTSOV: Could they be motivated to change their opinion? Wine, women, men, money. I have much to offer...

PHILLIPS: We are hoping to avoid any operations that compromise our fragile political position.

FAN: Show some spine. Would you rather explain to your higher-ups how a foreign PMC staged an armed assault on a USGOV facility?

PHILLIPS: You may be joking, but I assure you I don't take that threat lightly, even in jest.

PEVTSOV: She's right. This has gone on long enough, I am almost begining to sense that you have an interest in protecting her.

PHILLIPS: That is an absurd statement.

CALVIN: I think I understand. She made her play and it tanked. Her funding came from the promise of the inoculation program and an imminent risk to the population. But she's got nothing to show for that save a vaccine with a kill rate too high to be taken seriously.

FAN: What about the Portal Virus program?

CALVIN: She siphoned funds for that from inoculation research. The virus hurt those of us in the XM arena dramatically, but that's commerce in a very shadowy area of the spectrum. From a political point of view, it was a waste of millions of dollars for... what? Snake oil and a magic show.

OWEN: Exactly. So, we create a narrative. Devra's flailing, she's treading water, she's burning millions and basically creating an unusable toxic product based on a risk that she blew massively out of proportion and... And she's unstable too... burned out and on the edge.

CALVIN: And then we use the rumor mill.

OWEN: If word starts to get around on the hill that the senators who are funding her are burning scarce resources on a madwoman creating poison based on a paranoid delusion...

CALVIN: I have operators on the hill who could be leveraged for this.

PHILLIPS: A smear campaign's a little soft for my liking, but I have no objection.