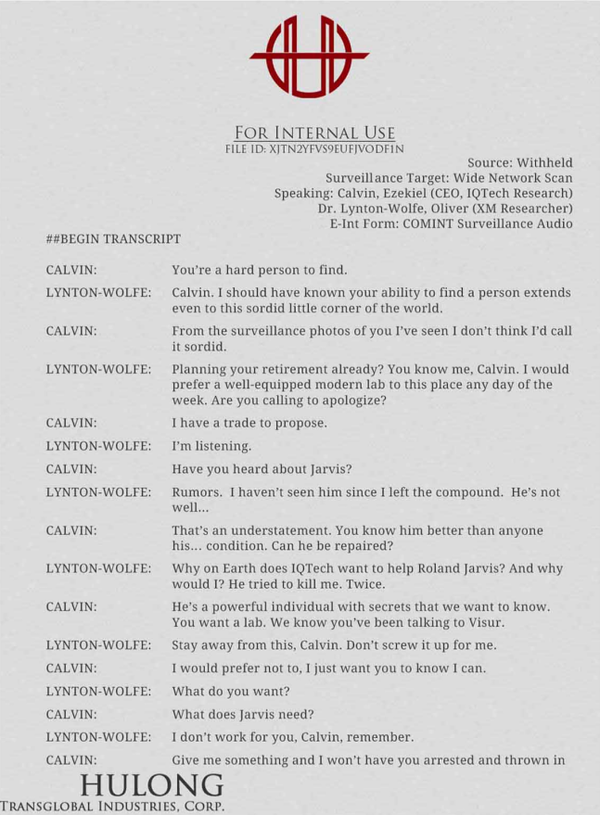 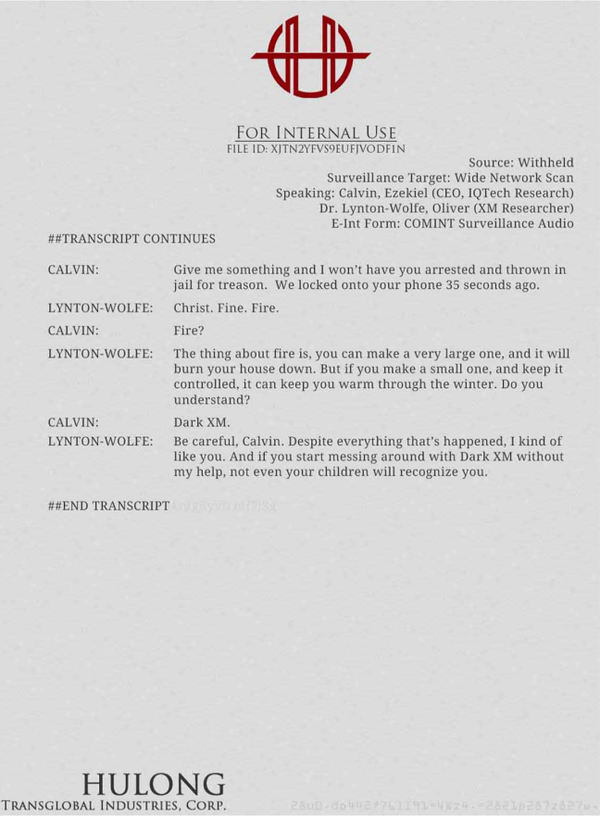 It seems Calvin has taken an interest in the flagging health of Enlightened ideologue +Roland Jarvis. It's unclear exactly what his play is, but the solution, if Lynton-Wolfe is correct, is a journey down a path filled with danger.

CALVIN: You're a hard person to field.

LYNTON-WOLFE: Calvin. I should have known your ability to find a person extends even to this sordid little corner of the world.

CALVIN: From the surveillance photos of you I've seen I don't think I'd call it sordid.

LYNTON-WOLFE: Planning your retirement already? You know me, Calvin. I would prefer a well-equipped modern lab to this place any day of the week. Are you calling to apologize?

CALVIN: I have a trade to propose.

CALVIN: Have you heard about Jarvis?

LYNTON-WOLFE: Rumors. I haven't seen him since I left the compound. He's not well...

CALVIN: That's an understatement. You know him better than anyone his... condition. Can he be repaired?

LYNTON-WOLFE: Why on Earth does IQTech want to help Roland Jarvis? And why would I? He tried to kill me. Twice.

CALVIN: He's a powerful individual with secrets that we want to know. You want a lab. We know you've been talking to Visur.

LYNTON-WOLFE: Stay away from this, Calvin. Don't screw it up for me.

CALVIN: I would prefer not to. I just want you to know I can.

LYNTON-WOLFE: What do you want?

CALVIN: What does Jarvis need?

LYNTON-WOLFE: I don't work for you, Calvin, remember.

CALVIN: Give me something and I won't have you arrested and thrown in

FOR INTERNAL USE
FILE ID: XJTN2YFVS9EUFJVODF1N

CALVIN: Give me something and I won't have you arrested and thrown in jail for treason. We locked onto your phone 35 seconds ago.

LYNTON-WOLFE: The thing about fire is, you can make a very large one, and it will burn your house down. But if you make a small one, and keep it controlled, it can keep you warm through the winter. Do you understand?

LYNTON-WOLFE: Be careful, Calvin. Despise everything that's happened, I kind of like you. And if you start messing around with Dark XM without my help, not even your children will recognize you.