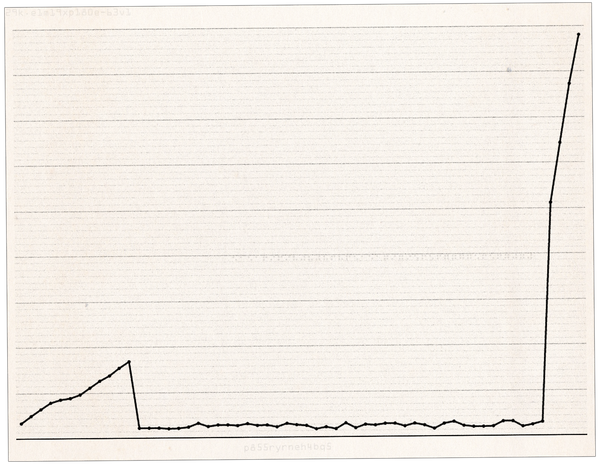 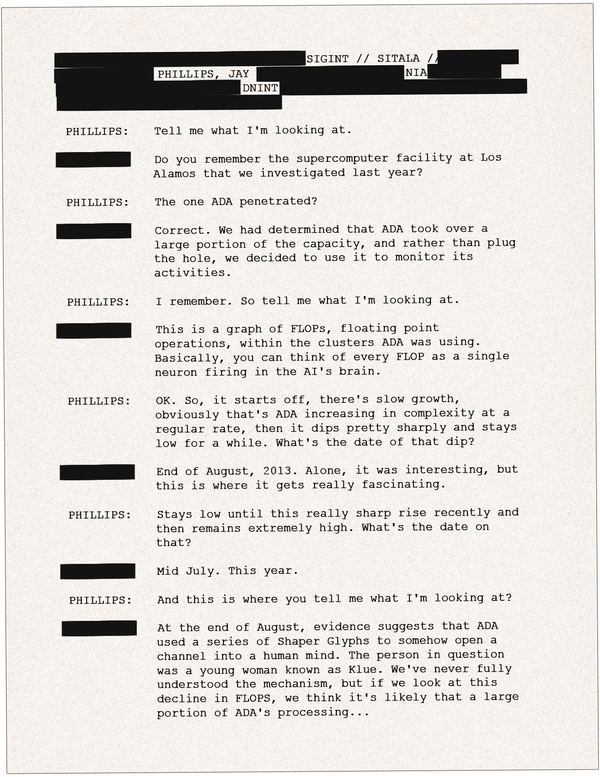 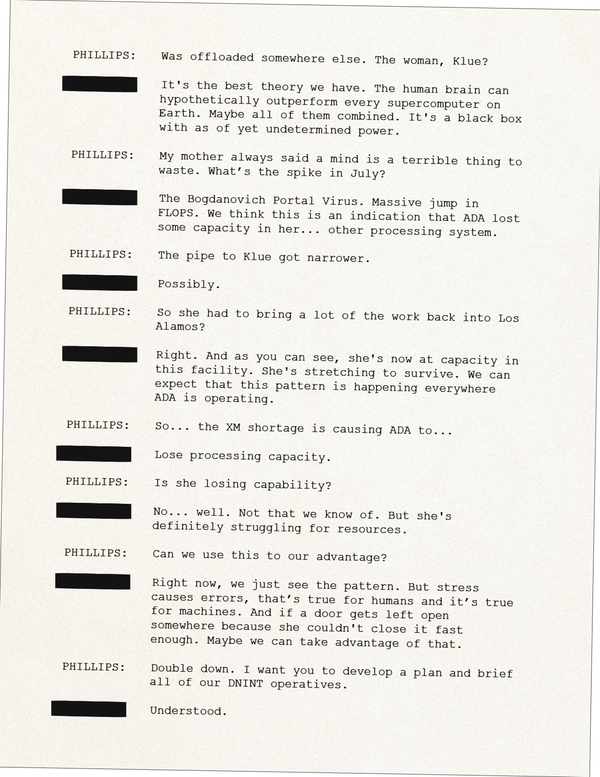 Niantic Project
2014/08/18 17:35:26(Google+)
Sitala
We have heard multiple times since the +Devra Bogdanovich Virus emerged that, somehow, ADA may have been affected by the change in the Portal Network.

This leaked NIA transcript seems to finally provide some evidence of ADA's relationship to Exotic Matter and how the recent changes to the Portals may be having an impact on the Algorithm.

A passcode to those who enrich this conversation with meaningful insights, speculation and references.

PHILLIPS: Tell me what I'm looking at.

XXXXXXXX: Do you remember the supercomputer facility at Los Alamos that we investigated last year?

PHILLIPS: The one ADA penetrated?

XXXXXXXX: Correct. We had determined that ADA took over a large portion of the capacity, and rather than plug the hole, we decided to use it to monitor its activities.

PHILLIPS: I remember. So tell me what I'm looking at.

XXXXXXXX: This is a graph of FLOPs, floating point operations, within the clusters ADA was using. Basically, you can think of every FLOP as a single neuron firing in the AI's brain.

PHILLIPS: OK. So, it starts off, there's slow growth, obviously that's ADA increasing in complexity at a regular rate, then it dips pretty sharply and stays low for a while. What's the date of that dip?

XXXXXXXX: End of August, 2013. Alone, it was interesting, but this is where it gets really fascinating.

PHILLIPS: Stays low until this really sharp rise recently and then remains extremely high. What's the date on that?

PHILLIPS: And this is where you tell me what I'm looking at?

XXXXXXXX: At the end of August, evidence suggests that ADA used a series of Shaper Glyphs to somehow open a channel into a human mind. The person in question was a young woman known as Klue. We're never fully understood the mechanism, but if we look at this decline in FLOPS, we think it's likely that a large portion of ADA's processing...

PHILLIPS: Was offloaded somewhere else. The woman, Klue?

XXXXXXXX: It's the best theory we have. The human brain can hypothetically outperform every supercomputer on Earth. Maybe all of them combined. It's a black box with as of yet undetermined power.

PHILLIPS: My mother always said a mind is a terrible thing to waste. What's the spike in July?

XXXXXXXX: The Bogdanovich Portal Virus. Massive jump in FLOPS. We think this is an indication that ADA lost some capacity in her... other processing system.

PHILLIPS: The pipe to Klue got narrower.

PHILLIPS: So she had to bring a lot of the work back into Los Alamos?

XXXXXXXX: Right. And as you can see, she's now at capacity in this facility. She's stretching to survive. We can expect that this pattern is happening everywhere ADA is operating.

PHILLIPS: So... the XM shortage is causing ADA to...

PHILLIPS: Is she losing capability?

XXXXXXXX: No... well. Not that we know of. But she's definitely struggling for resources.

PHILLIPS: Can we use this to our advantage?

XXXXXXXX: Right now, we just see the pattern. But stress causes errors, that's true for humans and it's true for machines. And if a door gets left open somewhere because she couldn't close it fast enough. Maybe we can take advantage of that.

PHILLIPS: Double down. I want you to develop a plan and brief all of our DNINT operatives.