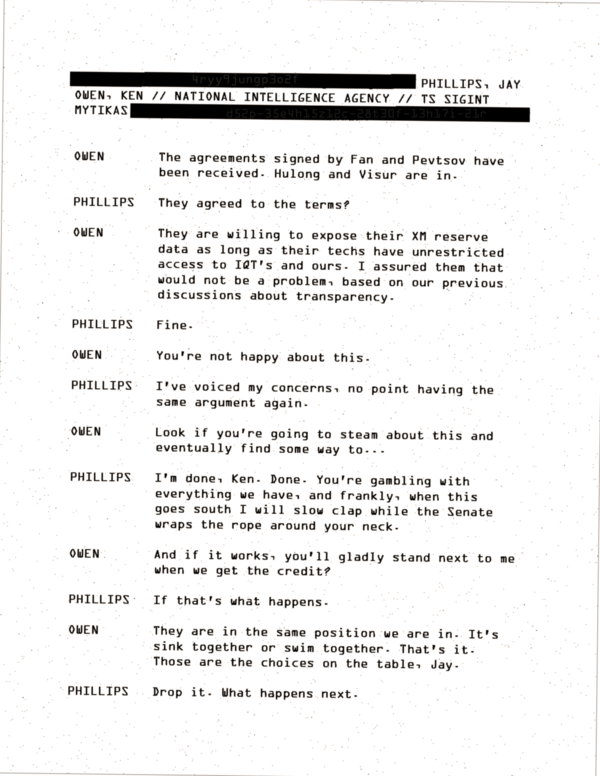 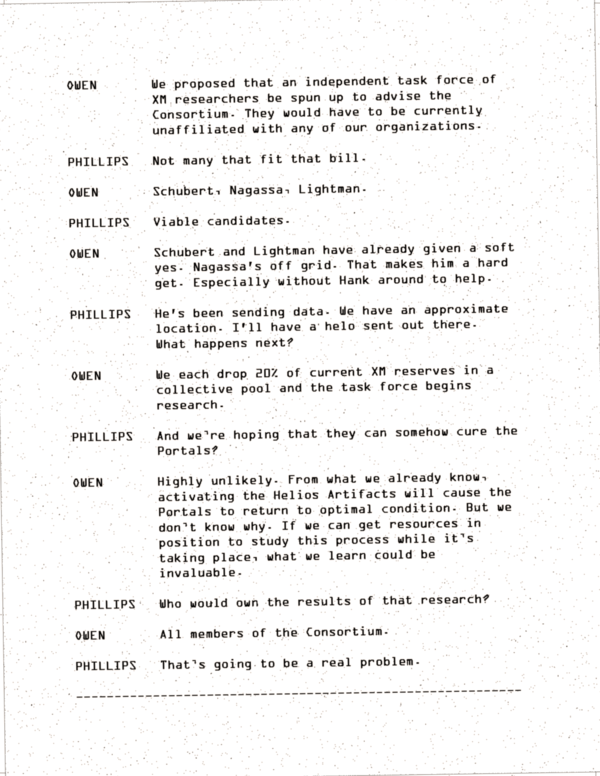 Niantic Project
2014/08/17 16:55:05(Google+)
Sink Together
+Hulong Transglobal, +Visur Technology and +IQTech Research have come to an agreement, and thanks to the NIA's Ken Owen, they will sit at the same table and begin to share resources to support each other through the crisis brought on by +Devra Bogdanovich's Portal Virus.

The Consortium has been formed. Its first order of business will be to bring a team of former Niantic Researchers together to begin to study the effects of the Portal Virus, and ultimately, how the power contained within the #Helios Artifacts may impact the Portal Network when, if, they are activated.

OWEN The agreements signed by Fan and Pevtsov have been received. Hulong and Visur are in.

OWEN They are willing to expose their XM reserve data as long as their techs have unrestricted access to IQT's and ours. I assured them that would not be a problem, based on our previous discussions about transparency.

OWEN You're not happy about this.

PHILLIPS I've voiced my concerns, no point having the same argument again.

OWEN Look if you're going to steam about this and eventually find some way to...

PHILLIPS I'm done, Ken. Done. You're gambling with everything we have, and frankly, when this goes south I will slow clap while the Senate wraps rope around your neck.

OWEN And if it works, you'll gladly stand next to me when we get the credit?

PHILLIPS If that's what happens.

OWEN They are in the same position we are in. It's sink together or swim together. That's it. Those are the choices on the table, Jay.

PHILLIPS Drop it. What happens next.

OWEN We proposed that an independent task force of XM researchers be spun up to advise the Consortium. They would have to be currently unaffiliated with any of our organizations.

PHILLIPS Not many that fit that bill.

OWEN Schubert and Lightman have already given a soft yes. Nagassa's off grid. That makes him a hard get. Especially without Hank around to help.

PHILLIPS He's been sending data. We have an approximate location. I'll have a helo sent out there. What happens next?

OWEN We each drop 20% of current XM reserves in a collective pool and the task force begins research.

PHILLIPS And we're hoping that they can somehow cure the Portals?

OWEN Highly unlikely. From what we already know, activating the Helios Artifacts will cause the Portals to return to optimal condition. But we don't know why. If we can get resources in position to study this process while it's taking place, what we learn could be invaluable.

PHILLIPS Who would own the results of that research?

OWEN All members of the Consortium.

PHILLIPS That's going to be a real problem.