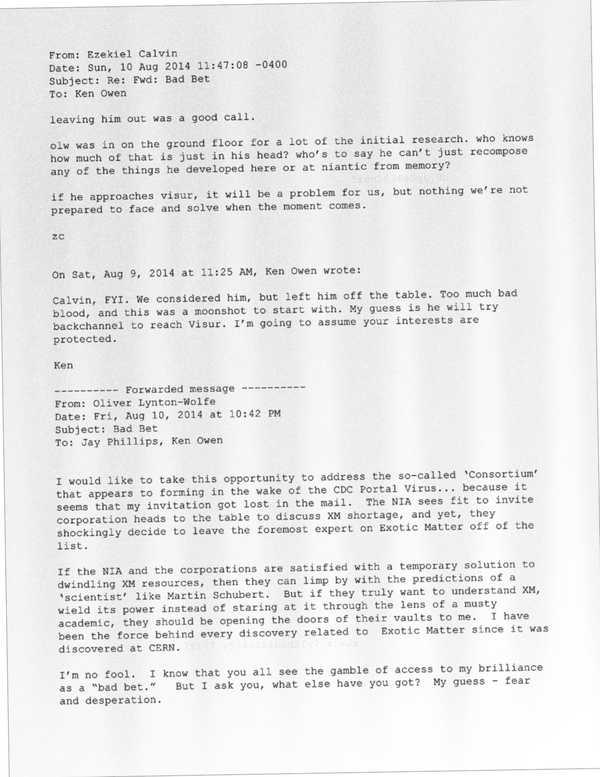 Niantic Project
2014/08/12 16:10:56(Google+)
Desparation
+Oliver Lynton-Wolfe, scorned at having been left by the wayside as the NIA proposes to bring the three XM corporations together to solve the XM crisis as a 'Consortium,' confronts Owen and Phillips.

Unfortunately for him, it looks like his argument fell on deaf ears.

leaving him out was a good call.

olw was in on the ground floor for a lot of the initial research. who knows how much of that is just in his head? who's to say he can't just recompose any of the things he developed here or at niantic from memory?
3ren563665q6j9h
if he approaches visur, it will be a problem for us, but nothing we're not prepared to face and solve when the moment comes.

Calvin, FYI. We considered him, but left him off the table. Too much bad blood, and this was a moonshot to start with. My guess is he will try backchannel to reach Visur. I'm going to assume your interests are protected.

I would like to take this opportunity to address the so-called 'Consortium' that appears to forming in the wake of the CDC Portal Virus... because it seems that my invitation got lost in the mail. The NIA sees fit to invite corporation heads to the table to discuss XM shortage, and yet, they shockingly decide to leave the foremost expert on Exotic Matter off of the list.

If the NIA and the corporations are satisfied with a temporary solution to dwindling XM resources, then they can limp by with the predictions of a 'scientist' like Martin Schubert. But if they truly want to understand XM, wield its power instead of staring at it through the lens of a musty academic, they should be opening the doors of their vaults to me. I have been the force behind every discovery related to Exotic Matter since it was discovered at CERN. 2ftj7 v974slained2fv7 x5w2x

I'm no fool. I know that you all see the gamble of access to my brilliance as a "bad bet." But I ask you, what else have you got? My guess - fear and desperation.