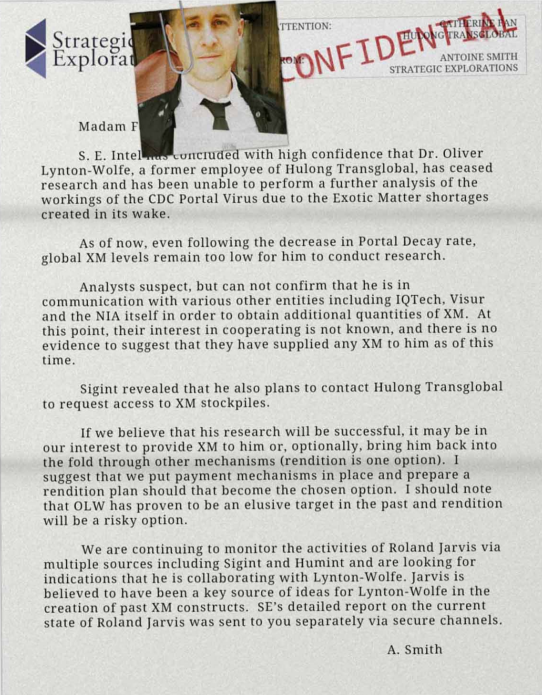 Niantic Project
2014/08/02 11:43:03(Google+)
Stalled
This recent, classified dispatch from Strategic Explorations, a subsidiary of +Hulong Transglobal, reveals that +Oliver Lynton-Wolfe's research is at a standstill until either the Portals returns to their normal, high-output state, or one of the XM Corporations provides him access to their XM reserves.

Unfortunately for Lynton-Wolfe, he has managed to burn the bridge with both +IQTech Research and +Hulong Transglobal. That leaves +Visur Technology, but it seems unlikely they would back him.

The brilliant but otherwise unstable researcher is known to bite the hand that feeds.

S.E. Intel was concluded with high confidence that Dr. Oliver Lynton-Wolfe, a former employee of Hulong Transglobal, has ceased research and has been unable to perform a further analysis of the workings of the CDC Portal Virus due to the Exotic Matter shortages created in its wake.

As of now, even following the decrease in Portal Decay rate, global XM levels remain too low for him to conduct research.

Analysis suspect, but can not confirm that he is in communication with various other entities including IQTech, Visur and the NIA itself in order to obtain additional quantities of XM. At this point, their interest in cooperating is not known, and there is no evidence to suggest that they have supplied any XM to him as of this time.

If we believe that his research will be successful, it may be in our interest to provide XM to him or, optionally, bring him back into the fold through other mechanisms (rendition is one option). I suggest that we put payment mechanisms in place and prepare a rendition plan should that become the chosen option. I should note that OLW has proven to be an elusive target in the past and rendition will be a risky option.

We are continuing to monitor the activities of Roland Jarvis via multiple sources including Sigint and Humint and are looking for indications that he is collaborating with Lynton-Wolfe. Jarvis is believed to have been a key source of ideas for Lynton-Wolfe in the creation of past XM constructs. SE's detailed report on the current state of Roland Jarvis was sent to you separately via secure channels.