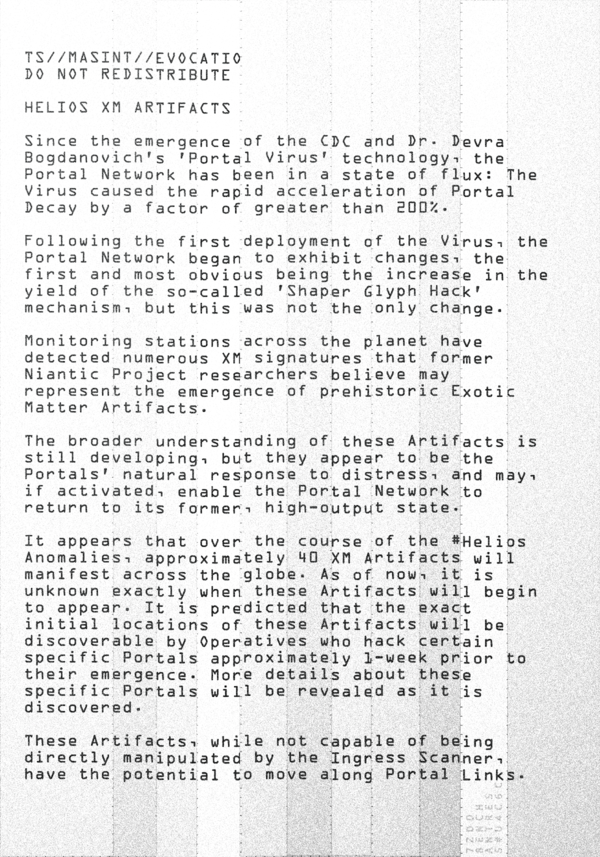 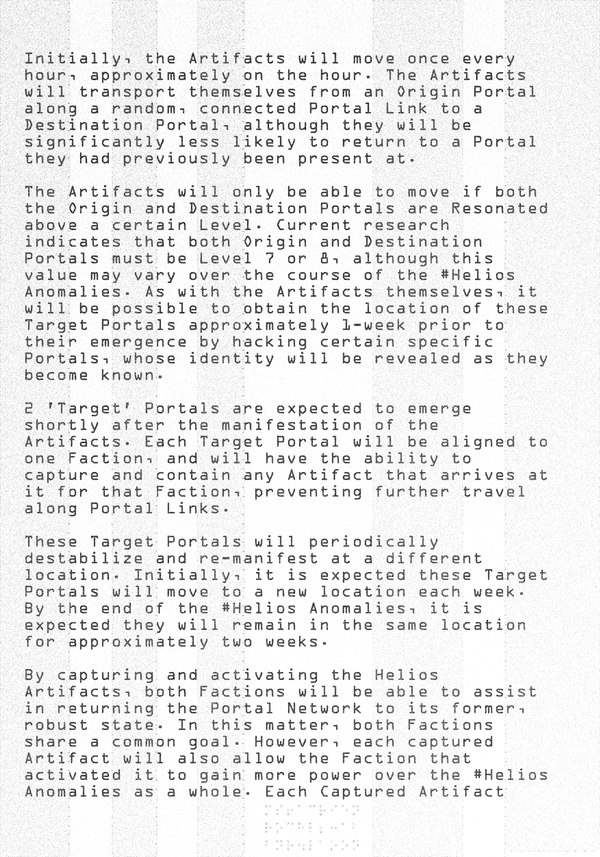 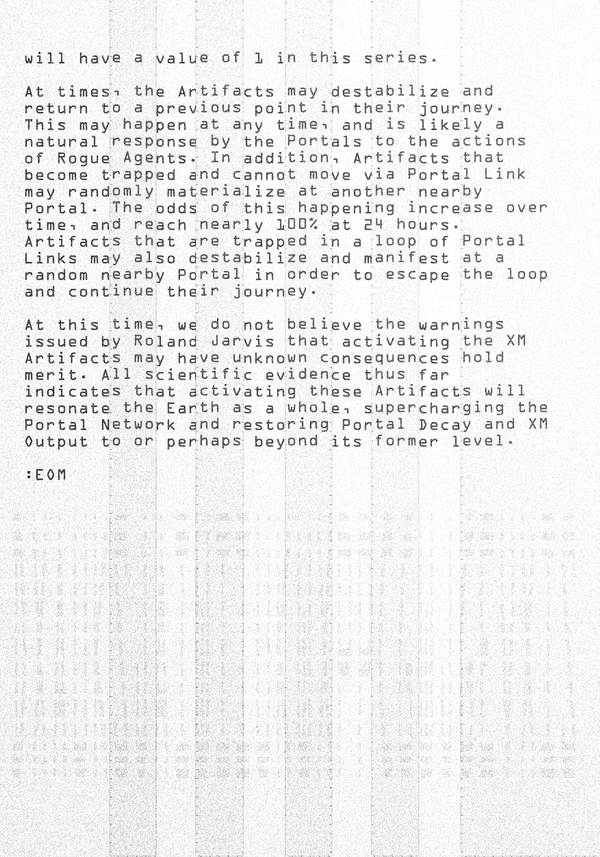 Niantic Project
2014/07/30 12:28:36(Google+)
Evocatio
This document was recovered at the Helios Anomalies last weekend.
There are many Agents and Investigators involved in its collection, assembly and release. I don't know who all of them are, but I am grateful for each of their efforts.

Based on the content on this document, it seems a permanent cure to Devra's Portal Virus may lie in the future. In the interim, +Devra Bogdanovich's message yesterday revealed that the actions of Agents worldwide to raise the Global MU above 700 Million has begun to take effect. It's likely that the effects of her initial deployment will experience dampening in the very near future.

But, both with regards to these 'Artifacts' as well as Devra's continued work at the CDC, great challenges lie ahead.

Having seen what I've seen since I joined this Investigation, I know one thing.

The tenacity of +Ingress Agents is an unquantifiable force. It will prevail.

Transcript
TS//MASINT//EVOCATIO
DO NOT REDISTRIBUTE

Since the emergence of the CDC and Dr. Devra Bogdanovich's 'Portal Virus' technology, the Portal Network has been in a state of flux: The virus caused the rapid acceleration of Portal Decay by a factor of greater than 200%.

Following the first deployment of the Virus, the Portal Network began to exhibit changes, the first and most obvious being the increase in the yield of the so-called 'Shaper Glyph Hack' mechanism, but this was not the only change.

The broader understanding of these Artifacts is still developing, but they appear to be the Portals' natural response to distress, and may, if activated, enable the Portal Network to return to its former, high-output state.

These Artifacts, while not capable of being directly manipulated by the Ingress Scanner, have the potential to move along Portal Links.

Initially, the Artifacts will move once every hour, approximately on the hour. The Artifacts will transport themselves from an Origin Portal along a random, connected Portal Link to a Destination Portal, although they will be significantly less likely to return to a Portal they had previously been present at.

The Artifacts will only be able to move if both the Origin and Destination Portals are Resonated above a certain Level. Current research indicates that both Origin and Destination Portals must be Level 7 or 8, although this value may vary over the course of the #Helios Anomalies. As with the Artifacts themselves, it will be possible to obtain the location of these Target Portals approximately 1-week prior to their emergence by hacking certain specific Portals, whose identity will be revealed as they become known.

2 'Target' Portals are expected to emerge shortly after the manifestation of the Artifacts. Each Target Portal will be aligned to on Faction, and will have the ability to capture and contain any Artifact that arrives at it for that Faction, preventing further travel along Portal Links.

By capturing and activating the Helios Artifacts, both Factions will be able to assist in returning the Portal Network to its former, robust state. In this matter, both Factions share a common goal. However, each captured Artifact will also allow the Factions that activated it to gain more power over the #Helios Anomalies as a whole. Each Captured Artifact

will have a value of 1 in this series.

At times, the Artifacts may destabilize and return to a previous point in their journey. This may happen at any time, and is likely a natural response by the Portals to the actions of Rogue Agents. In addition, Artifacts that become trapped and cannot move via Portal Link may randomly materialize at another nearby Portal. The odds of this happening increase over time, and reach nearly 100% at 24 hours.Artifacts that are trapped in a loop of Portal Links may also destabilize and manifest at a random nearby Portal in order to escape the loop and continue their journey.

At this time, we do not believe the warnings issued by Roland Jarvis that activating the XM Artifacts may have unknown consequences hold merit. All scientific evidence thus far indicates that activating these Artifacts will resonate the Earth as a whole, supercharging the Portal Network and restoring Portal Decay and XM Output to or perhaps beyond its former level.