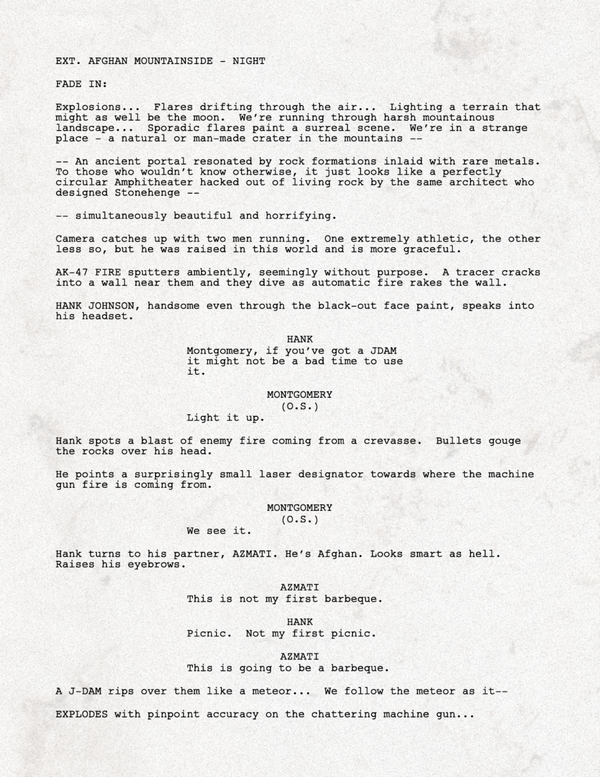 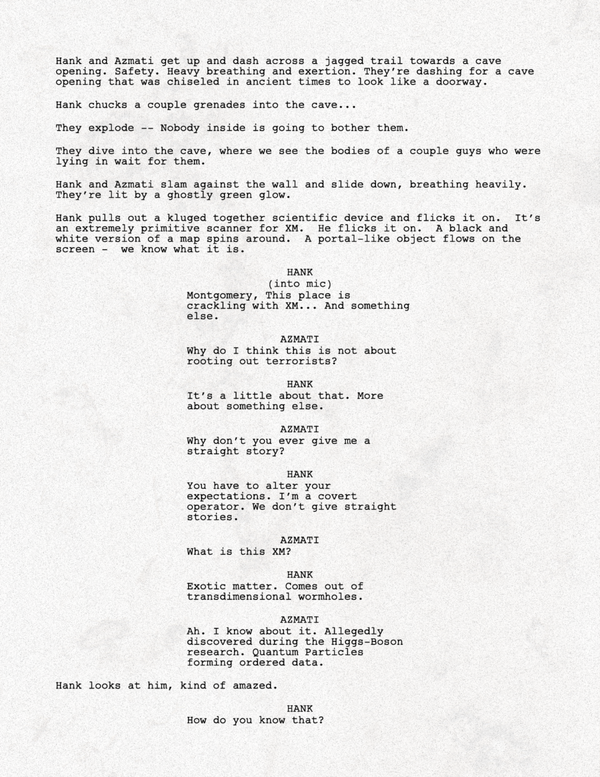 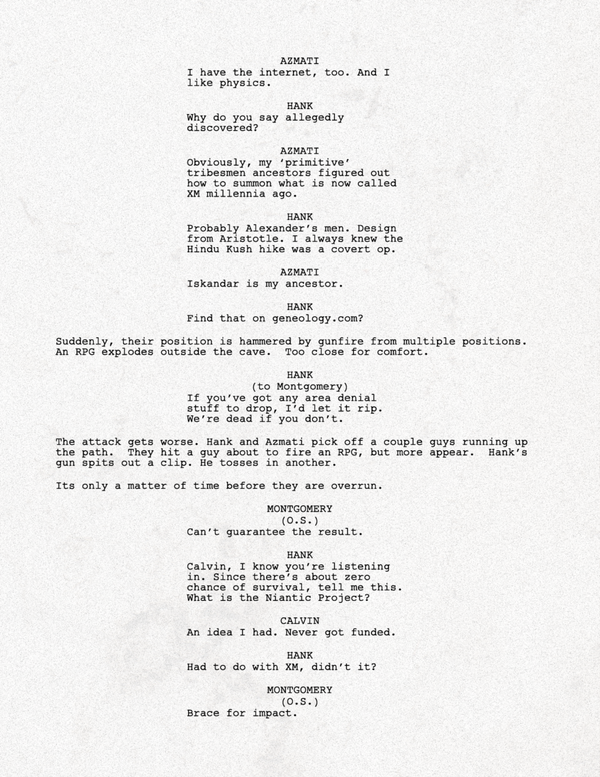 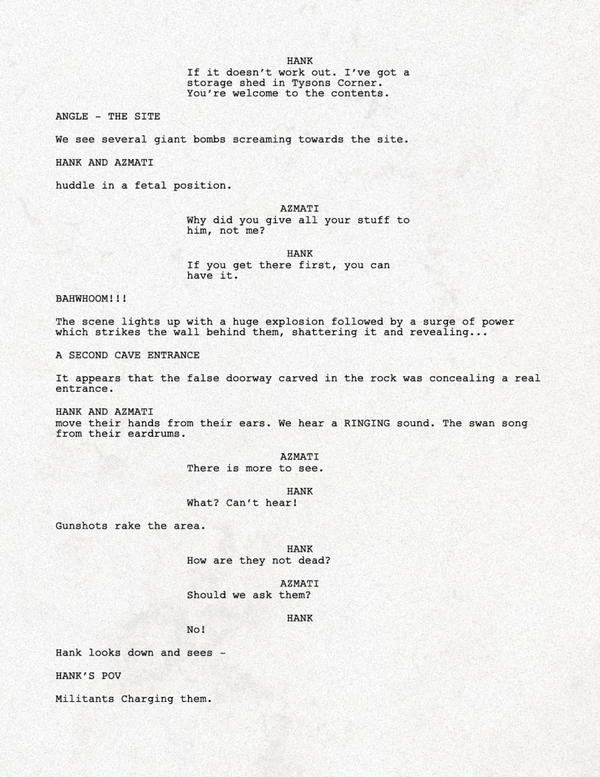 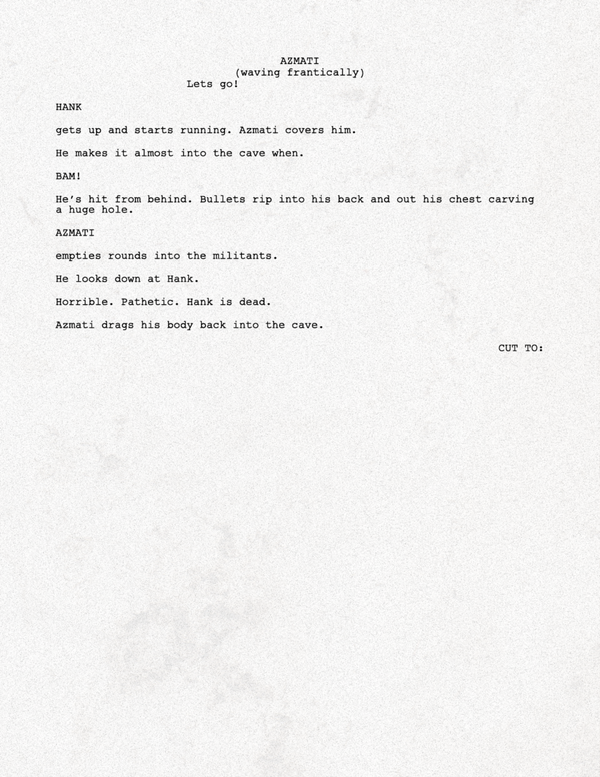 Niantic Project
2014/03/10 12:33:26(Google+)
Nominus Johnson
Last week, +Verum Inveniri and Agents from across the world worked together to disseminate and assemble a new scene from the Andy Nominus screenplay.

It covers in sharp and vibrant detail the last moments of a +Hank Johnson we've seen before, lying dead in a cave in Afghanistan, and helps us better understand the moments that led to now.

With the staggering revelations uncovered in Austin yesterday, what's clear is that Hank Johnson represents something we've never encountered before.

We have enough evidence before to begin to prepare hypotheses. Who or what is Hank Johnson? How is 13MAGNUS involved? Are there two Hanks or is this some kind of illusion aided by the power of Exotic Matter? And here, then, is the most important question: Having learned all that we've learned... do you trust Hank Johnson?

Explosions... Flares drifting through the air... Lighting a terrain that might as well be the moon. We're running through harsh mountainous landscape... Sporadic flares paint a surreal scene. We're in a strange place -- a natural or man-made crater in the mountains --

-- An ancient portal resonated by rock formations inlaid with rare metals. To those who wouldn't know otherwise, it just looks like a perfectly circular Amphitheater hacked out of living rock by the same architect who designed Stonehenge --

Camera catches up with two men running. One extremely athletic, the other less so, but he was raised in this world and is more graceful.

AK-47 FIRE sputters ambiently, seemingly without purpose. A tracer cracks into a wall near them and they dive as automatic fire rakes the wall.

HANK JOHNSON, handsome even through the black-out face paint, speaks into his headset.

HANK
Montgomery, if you've got a JDAM it might not be a bad time to use it.

MONTGOMERY
(O.S.)
Light it up.

Hank spots a blast of enemy fire coming from a crevasse. Bullets gouge the rocks over his head.

He points a surprisingly small laser designator towards where the machine gun fire is coming from.

AZMATI
This is not my first barbeque.

HANK
Picnic. Not my first picnic.

AZMATI
This is going to be a barbeque.

A J-DAM rips over them like a meteor... We follow the meteor as it--EXPLODES with pinpoint accuracy on the chattering machine gun...

Hank and Azmati get up and dash across a jagged trail towards a cave opening. Safety. Heavy breathing and exertion. They're dashing for a cave opening that was chiseled in ancient times to look like a doorway.

Hank chucks a couple grenades into the cave...

They explode -- Nobody inside is going to bother them.

They dive into the cave, where we see the bodies of a couple guys who were lying in wait for them.

Hank and Azmati slam against the wall and slide down, breathing heavily. They're lit by a ghostly green glow.

Hank pulls out a kluged together scientific device and flicks it on. It's an extremely primitive scanner for XM. He flicks it on. A black and white version of a map spins around. A portal-like object flows on the screen - we know what it is.

HANK
(into mic)
Montgomery, This place is crackling with XM... And something else.

AZMATI
Why do I think this is not about rooting out terrorists?

HANK
It's a little about that. More about something else.

AZMATI
Why don't you ever give me a straight story?

HANK
You have to alter your expectations. I'm a covert operator. We don't give straight stories.

AZMATI
What is this XM?

Hank looks at him, kind of amazed.

HANK
How do you know that?

AZMATI
I have the internet, too. And I like physics.

HANK
Why do you say allegedly discovered?

AZMATI
Obviously, my 'primitive' tribesmen ancestors figured out how to summon what is now called XM millennia ago.

AZMATI
Iskandar is my ancestor.

HANK
Find that on geneology.com?

Suddenly, their position is hammered by gunfire from multiple positions. An RPG explodes outside the cave. Too close for comfort.

HANK
(to Montgomery)
If you've got any area denial stuff to drop, I'd let it rip. We're dead if you don't.

The attack gets worse. Hank and Azmati pick off a couple guys running up the path. They hit a guy about to fire an RPG, but more appear. Hank's gun spits out a clip. He tosses in another.

Its only a matter of time before they are overrun.

HANK
Calvin, I know you're listening in. Since there's about zero chance of survival, tell me this. What is the Niantic Project?

CALVIN
An idea I had. Never got funded.

HANK
Had to do with XM, didn't it?

HANK
If it doesn't work out. I've got a storage shed in Tysons Corner. You're welcome to the contents.

We see several giant bombs screaming towards the site.

huddle in a fetal position.

AZMATI
Why did you give all your stuff to him, not me?

HANK
If you get there first, you can have it.

The scene lights up with a huge explosion followed by a surge of power which strikes the wall behind them, shattering it and revealing...

It appears that the false doorway carved in the rock was concealing a real entrance.

AZMATI
There is more to see.

HANK
How are they not dead?

AZMATI
Should we ask them?

Hank looks down and sees --

gets up and starts running. Azmati covers him.

He makes it almost into the cave when.

He's hit from behind. Bullets rip into his back and out his chest carving a huge hole.

empties rounds into the militants.

He looks down at Hank.

Azmati drags his body back into the cave.