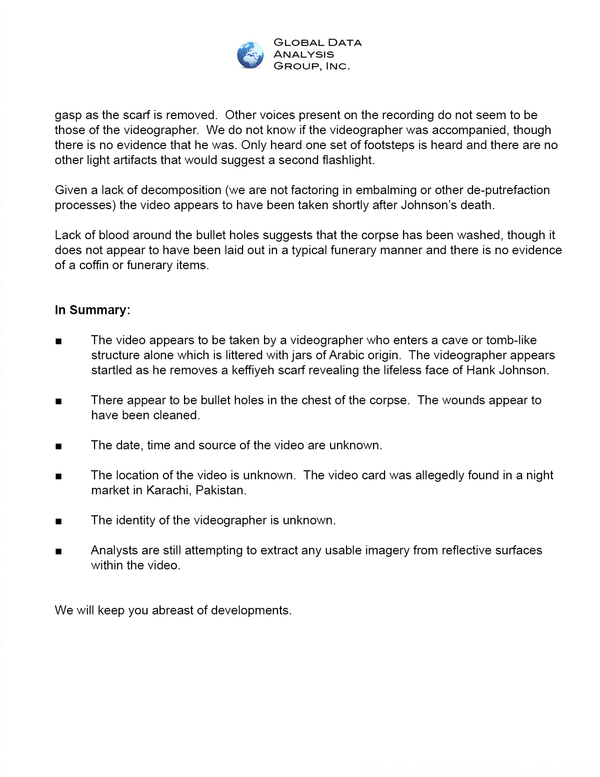 The Video surfaced has no date, time or GPS stamp. Thus we can not say for certainty where or when it was taken.

It is believed to have been extracted from a video camera obtained in Karachi, Pakistan, but we have no confirmation of this. Claim was made by the 'finder' who self-identifies as 'Wahid Mazhar.'

While the video is extremely consistent in light, lensing and style with the video believed to have been taken by Hank Johnson (this has not been contested) in December 2013[1] it is impossible to say whether this is from the same source or not. It does not link in terms of continuity, but it may well have been taken minutes or hours later.

The video begins with a dirt floor consistent with the Afghan cave from the previously mentioned video.

The on-camera audio includes voices speaking in an as yet undetermined language. A transcription has not yet been possible.

The first recognizable images are what appear to be ceremonial jars discarded on the ground, but exact dating and sourcing of these objects is impossible due to the lack of detail present. Not far from the jars is what appears to be an Arabic keffiyeh covering the head of a human body with visible wounds, potentially bullet wounds.

The clothes on the body do not match those worn by Hank Johnson as last seen in the 13MAGNUS Nomad video, but the height, weight and build of the body are a match to him.

When the hand of the unknown videographer enters frame and removes the keffiyeh, what appears to be the face of Hank Johnson is revealed. Facial recognition software was used to confirm the identity of the decedent.

While there is room for uncertainty, the indicators preliminarily confirm that Hank Johnson is dead.

gasp as the scarf is removed. Other voices present on the recording do not seem to be those of the videographer. We do not know if the videographer was accompanied, though there is no evidence that he was. Only heard one set of footsteps is heard and there are no other light artifacts that would suggest a second flashlight.

Given a lack of decomposition (we are not factoring in embalming or other de-putrefaction processes) the video appears to have been taken shortly after Johnson's death.

Lack of blood around the bullet holes suggests that the corpse has been washed, though it does not appear to have been laid out in a typical funerary manner and there is not evidence of a coffin or funerary items.

We will keep you abreast of developments.