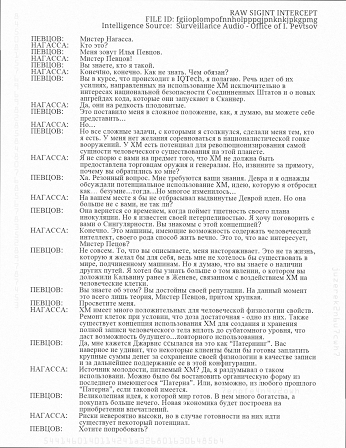 Niantic Project
2014/01/30 14:52:48(Google+)
Forever
The contact who's been helping me make sense of the document is not a native speaker, so the going has been slow, but I'm beginning to see the big picture contained within.

Like +Hulong Transglobal, +Visur Technology has bold plans for the future. And like Hulong, they aren't wasting time and resources playing catchup with +IQTech Research's Regional Tracking Technology. They're looking for the next big thing: An impossible dream, made tangible through the power of Exotic Matter.

Russian speakers, your help is needed. Once the document is translated, we can begin our analysis.

A passcode to those who help with the translation and enrich our conversation by adding meaningful insights, references and speculation.

Pevstov: Mr. Nagassa.
Nagassa: Who's this?
Pevstov: My name is Ilya Pevtsov.
Nagassa: Mr. Pevtsov!
Pevstov: You know who I am?
Nagassa: Of course, of course. How could I not know. What's up?
Pevstov: I understand you know what is going on in IQTech. It's about their effort dedicated to XM use exclusively in the interest of US national security and the new code upgrades that they are applying to scanner
Nagassa: Yes, they are surprisingly productive
Pevstov: This puts me in a bad situation as you can imagine
Nagassa: But..
Pevstov: But all the complicated tasks that I've come upon made me what I am. I don't wish to compete in the international arms race. XM has a potential to revolutionize the very essence of human existence on this planet.
Nagassa: I don't object to the fact that XM should not be given to arms traders and military. But, excuse my being blunt, why did you decide to contact me?
Pevstov: Ha. Reasonable question. I need your knowledge. Devra and I once discussed the potential use of XM, idea that I dismissed as nonsense... back then... but much has changed since.
Nagassa: If I were you, I would not dismiss Devra's ideas. She isn't with you anymore though, right?
Pevstov: She'll be back eventually when she finds her plan of innoculation useless. But I am known for my impatience. I want to talk about Singularity with you. Are you aware of this concept?
Nagassa: Of course. Machines that could contain the human intelligence, a sort of eternal existence. Is this what you are interested in, Mr. Pevtsov?
Pevstov: Not exactly. What you describe is alarming. This is not the life I wish for myself, I woudln't want to exist in a world supervised by machines. But I know you are aware of other ways existing. I would like to know more about the phenomenon you've reported to Calvin earlier on in Geneva, related to XM effect on human cells.
Pevstov: [Nagassa in fact]: You are aware of this? You are worth of your reputation. At the moment this is only a theory, Mr. Pevtsov, quite a fragile one.
Pevstov: Enlighten me.
Nagassa: XM has many positive effects on human physiology. Repairing the cells, provided the dosage is enough, is one of them. Also, there is a concept of storing XM to create and save the entire record of human body down to subatomic level, which will give a possibility of... re-usage in future.
Pevstov: Yes, I think Jarvis referred to this as "patterning". You would probably not be suprised, that some clients are ready to make substantial payments to save their physiology as a recording and for further ability of keeping it in this configuration.
Nagassa: Source of youth fuelled by XM? Yes, I thought about this usage. You could restore the organic form from the last "pattern". Or any previous "pattern" if it exists.
Pevstov: Great idea, that the world is ready for. It has lots of riches but nothing to purchase anymore. The new economy will be based on buying impressions [/emotions].
Nagassa: The risks are incredibly high, but if you are ready for them, there is some potential.
Pevstov: Would you like to try?