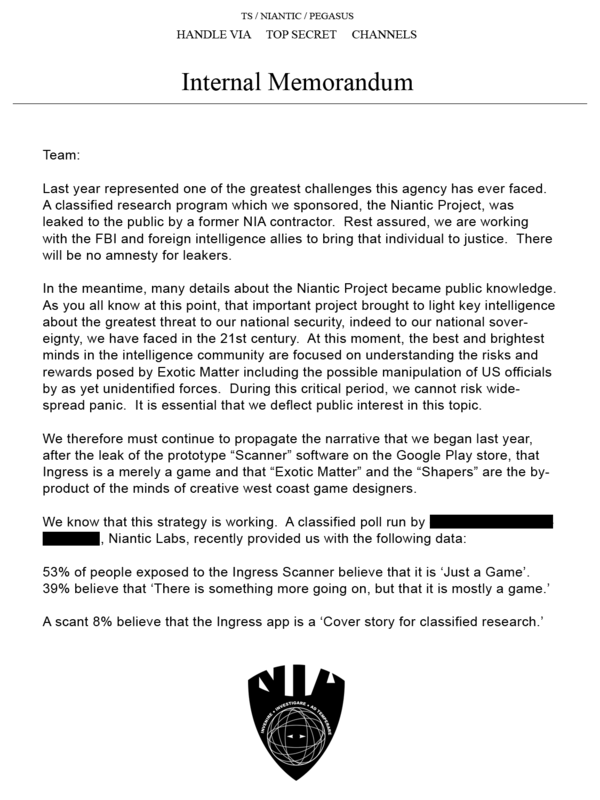 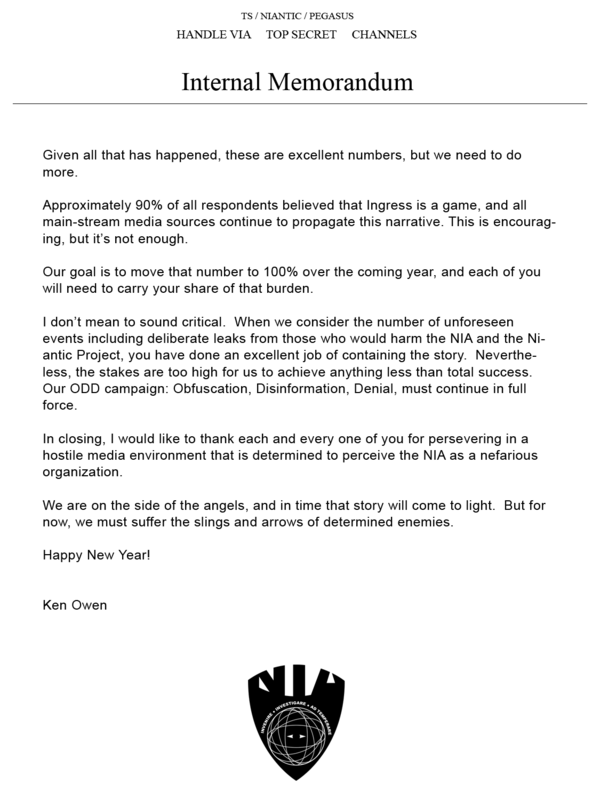 Ken Owen looks back on the challenges faced by the NIA as they attempted to bury the constant stream of revelations emerging from the leak of the Ingress Scanner and the discovery of the Niantic Project.

What's clear from the tone of the memorandum is that the NIA hasn't given up their goal of re-writing the status quo. Those of us in the Investigative Community are among the tiny majority who know the scope and scale of the Ingress coverup, and to the NIA, we are a threat.

No amnesty, the memo promises. The question then, is not whether or not we are in Ken Owen's sights. That much, we can assume is true, or will be very soon. The question is, what does that threat mean? What does it mean to Investigators such as yourselves? What might it mean to those like me or P. A. Chapeau who stand closer to the center of the leaks. What are his tactics, and how do they differ from those of Jay Phillips? How might Owen attempt to silence us?

Last year represented one of the greatest challenges this agency has ever faced. A classified research program which we sponsored, the Niantic Project, was leaked to the public by a former NIA contractor. Rest assured, we are working with the FBI and foreign intelligence allies to bring that individual to justice. There will be no amnesty for leakers.

In the meantime, many details about the Niantic Project became public knowledge. As you all know at this point, that important project brought to light key intelligence about the greatest threat to our national security, indeed to our national sovereignty, we have faced in the 21st century. At this moment, the best and brightest minds in the intelligence community are focused on understanding the risks and rewards posed by Exotic Matter including the possible manipulation of US officials by as yet unidentified forces. During this critical period, we cannot risk widespread panic. It is essential that we deflect public interest in this topic.

We therefore must continue to propagate the narrative that we began last year, after the leak of the prototype "Scanner" software on the Google Play store, that Ingress is a merely a game and that "Exotic Matter" and the "Shapers" are the by-product of the minds of creative west coast game designers.

We know that this strategy is working. A classified poll run by XXXXXXX, Niantic Labs, recently provided us with the following data:

A scant 8% believe that the Ingress app is a 'Cover story for classified research.'

Given all that has happened, these are excellent numbers, but we need to do more.

Approximately 90% of all respondents believed that Ingress is a game, and all main-stream media sources continue to propagate this narrative. This is encouraging, but it's not enough.

Our goal is to move that number to 100% over the coming year, and each of you will need to carry your share of that burden.

I don't mean to sound critical. When we consider the number of unforeseen events including deliberate leaks from those who would harm the NIA and the Niantic Project, you have done an excellent job of containing the story. Nevertheless, the stakes are too high for us to achieve anything less than total success. Our ODD campaign: Obfuscation, Disinformation, Denial, must continue in full force.

In closing, I would like to thank each and every one of you for persevering in a hostile media environment that is determined to perceive the NIA as a nefarious organizetion.

We are the side of the angels, and in time that story will come to light. But for now, we must suffer the slings and arrows of determined enemies.