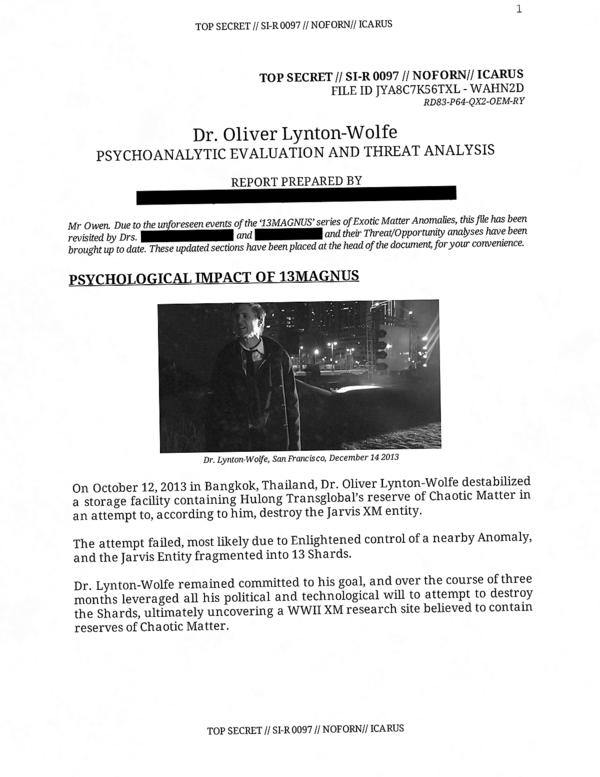 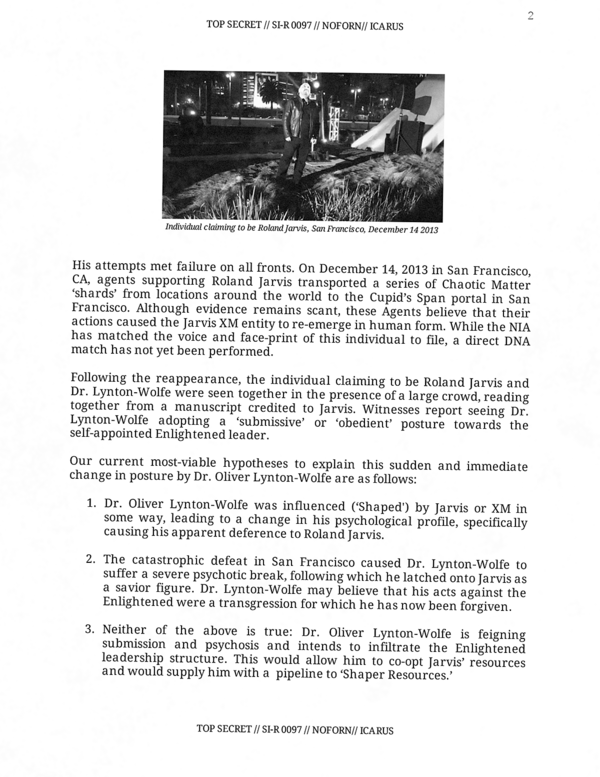 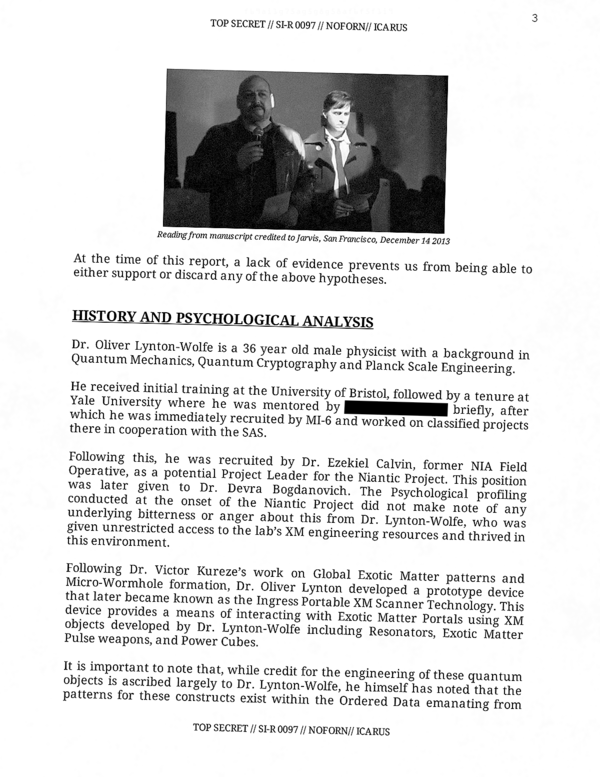 Following the climactic events of December 14th and the 'manifestation' of Roland Jarvis in San Francisco, the Enlightened leader and Dr. Lynton-Wolfe were spotted reading together from the 'Jarvis Redemption' speech (http://goo.gl/KlYskW & http://goo.gl/KGL621) at a Cross-Faction Ingress Agent meetup taking place nearby.

Dr. Lynton-Wolfe's sudden reversal of opinion towards a man he had previously referred to as a 'Shaper puppet' took many by surprise, and it seems we are not alone in asking what that means. A classified document of unknown origin came into my possession today. Among other things, the document sheds light on Lynton-Wolfe's psychological state, particularly in light of the events of #13MAGNUS.

Who wrote this document? Unknown, but I can begin to list the suspects. Which of the possible analyses do you agree with, or do you have an alternate theory? And finally, the document treats the appearance of Jarvis in San Francisco with some suspicion... Do you think that suspicion is justified? Do you share it?

On October 12, 2013 in Bangkok, Thailand, Dr. Oliver Lynton-Wolfe destabilized a storage facility containing Hulong Transglobal's reserve of Chaotic Matter in an attempt to, according to him, destroy the Jarvis XM entity.

The attempt failed, most likely due to Enlightened control of a nearby Anomaly, and the Jarvis Entity fragmented into 13 Shards.

Dr. Lynton-Wolfe remained committed to his goal, and over the course of three months leveraged all his political and technological will to attempt to destroy the Shards, ultimately uncovering a WWII XM research site believed to contain reserves of Chaotic Matter.

His attempts met failure on all fronts. On December 14, 2013 in San Francisco, CA, agents supporting Roland Jarvis transported a series of Chaotic Matter 'shards' from locations around the world to the Cupid's Span portal in San Francisco. Although evidence remains scant, these Agents believe that their actions caused the Jarvis XM entity to re-emerge in human form. While the NIA has matched the voice and face-print of this individual to file, a direct DNA match has not yet been performed.

Following the reappearance, the individual claiming to be Roland Jarvis and Dr. Lynton-Wolfe were seen together in the presence of a large crowd, reading together from a manuscript credited to Jarvis. Witnesses report seeing Dr. Lynton-Wolfe adopting a 'submissive' or 'obedient' posture towards the self-appointed Enlightened leader.

Our current most-viable hypotheses to explain this sudden and immediate change in posture by Dr. Oliver Lynton-Wolfe are as follows:

At the time of this report, a lack of evidence prevents us from being able to either support or discard any of the above hypotheses.

Following this, he was recruited by Dr. Ezekiel Calvin, former NIA Field Operative, as a potential Project Leader for the Niantic Project. This position was later given to Dr. Devra Bogdanovich. The Psychological profiling conducted at the onset of the Niantic Project did not make note of any underlying bitterness or anger about this from Dr. Lynton-Wolfe, who was given unrestricted access to the lab's XM engineering resources and thrived in this environment.

It is important to note that, while credit for the engineering of these quantum objects is ascribed largely to Dr. Lynton-Wolfe, he himself has noted that the patterns for these constructs exist within the Ordered Data emanating from

the Exotic Matter Portals, much as biological traits are encoded in the nucleotide chains of DNA. His work was focused on unlocking the potential for these constructs in our dimension, rather than creating them from scratch.

Following the dissolution of the Niantic Project facility in Geneva, Switzerland, Dr. Oliver Lynton-Wolfe worked first at IQTech, a US-based and DOD-sanctioned think tank (run by Dr. Ezekiel Calvin) where he developed the ADA Refactor (a reverse-engineered version of Hulong Transglobal's Jarvis Virus weapon), and the Heat Sink Portal Modification.

During the events of what has been referred to as 'Operation Cassandra,' Dr. Lynton-Wolfe was allegedly contacted by the Jarvis entity and agreed to cooperate with him. In the days that followed, recorded transcripts depict a continual decline in Dr. Lynton-Wolfe's mental state, particularly after the defeat of the Enlightened faction. Dr. Lynton-Wolfe seemed to fear some sort of retribution.

Dr. Lynton-Wolfe remains the leading Exotic Matter technologist alive today. He has previously engaged with foreign power interests, does not hold patriotic or nationalistic ideals in high regard, and is believed to place the pursuit of knowledge alone as his highest priority and value.
This makes him both unpredictable and uncontrollable. Due to his expertise in XM weaponization and lack of loyalty to any specific nation or ideological group, he is a prime target for recruitment by foreign intelligence or commercial interests.