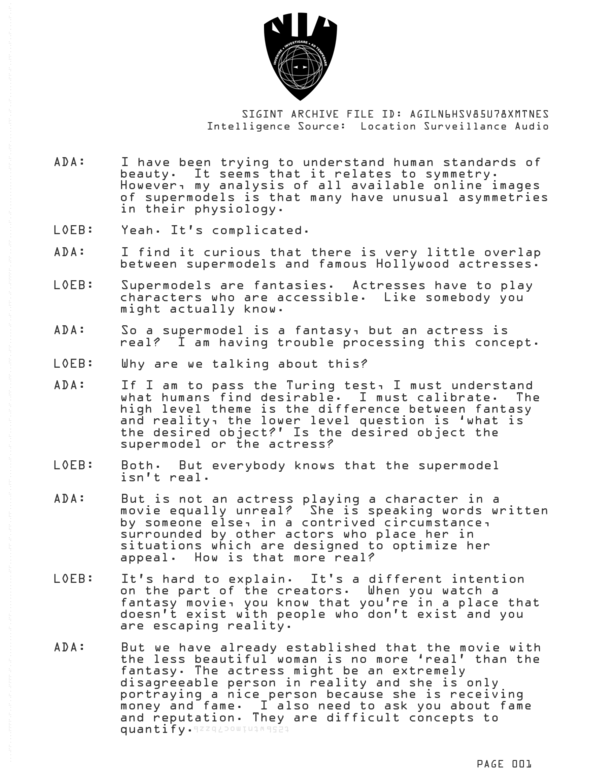 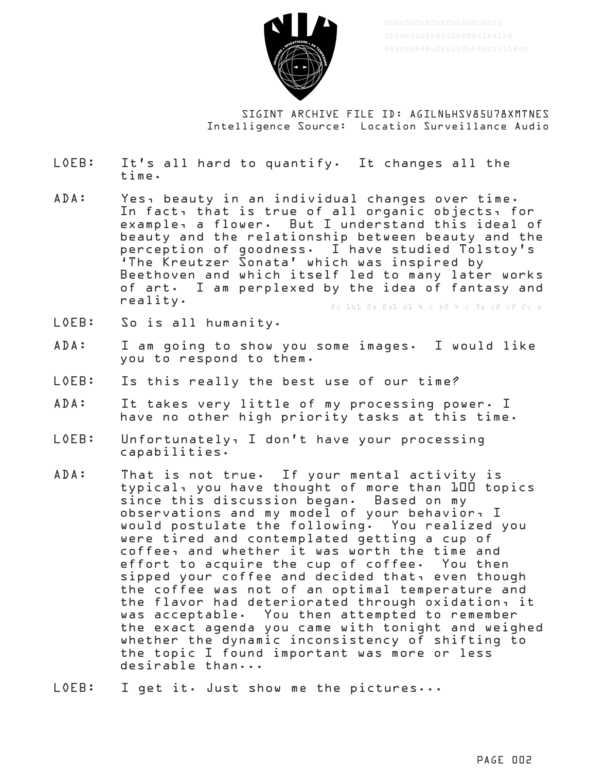 One of the questions I've been pondering watching the massive, worldwide culmination of Operation #13MAGNUS has been... where is ADA?

I recall many discussions we had together, with Investigators often speculating that very little happened in the world of Ingress without ADA either being in the know, or being somehow involved. And yet, after bringing Hank and Devra together at the very beginning of this series of Anomalies in Los Angeles, she has been silent, perhaps suspiciously so.

The thought had barely occurred to me when I noticed this file on my desktop. Perhaps I sensed it was there, I can't be sure.

It's old, archival. A seemingly irrelevant artifact from a buried NIA server somewhere. And yet, in the midst of Shards racing across the Earth to their destinations, and thousands of Agents strategizing, conspiring, and waiting with bated breath for the final #13MAGNUS Anomalies to strike, this document surfaced.

That really is the question. It's one we should have asked before, but didn't. What does ADA's silence mean? Has she been a powerless witness to the events of #13MAGNUS or an active conspirator. What is her agenda, and when the two Factions stand in a new world of their own creation, what will ADA's position be?

A passcode to those who enrich our conversation with meaningful speculation, insights and references.


ADA: I have been trying to understand human standards of beauty. It seems that it relates to symmetry. However, my analysis of all available online images of supermodels is that many have unusual asymmetries in their physiology.

ADA: I find it curious that there is very little overlap between supermodels and famous Hollywood actresses.

LOEB: Supermodels are fantasies. Actresses have to play characters who are accessible. Like somebody you might actually know.

ADA: So a supermodel is a fantasy, but an actress is real? I am having trouble processing this concept.

LOEB: Why are we talking about this?

ADA: If I am to pass the Turing test, I must understand what humans find desirable. I must calibrate. The high level theme is the difference between fantasy and relity, the lower level question is 'what is the desired object?' Is the desired object the supermodel or the actress?

LOEB: Both. But everybody knows that the supermodel isn't real.

ADA: But is not an actress playing a character in a movie equally unreal? She is speaking words written by someone else, in a contrived circumstance, surrounded by other actors who place her in situations which are designed to optimize her appeal. How is that more real?

LOEB: It's hard to explain. It's a different intention on the part of the creators. When you watch a fantasy movie, you know that you're in a place that doesn't exist with people who don't exist and you are escaping reality.

ADA: But we have already established that the movie with the less beautiful woman is no more 'real' than the fantasy. The actress might be an extremely disagreeable person in reality and she is only portraying a nice person because she is receiving money and fame. I also need to ask you about fame and reputation. They are difficult concepts to quantify.


LOEB: It's all hard to quantify. It changes all the time.

ADA: Yes, beauty in an individual changes over time. In fact, that is true of all organic objects, for example, a flower. But I understand this ideal of beauty and the relationship between beauty and the perception of goodness. I have studied Tolstoy's 'The Kreutzer Sonata' which was inspired by Beethoven and which itself led to many later works of art. I am perplexed by the idea of fantasy and reality.

LOEB: So is all humanity.

ADA: I am going to show you some images. I would like you to respond to them.

LOEB: Is this really the best use of our time?

ADA: It takes very little of my processing power. I have no other high priority tasks at this time.

LOEB: Unfortunately, I don't have your processing capabilities.

ADA: That is not true. If your mental activity is typical, you have thought of more than 100 topics since this discussion began. Based on my observations and my model of your behavior, I would postulate the following. You realized you were tired and contemplated getting a cup of coffee, and whether it was worth the time and effort to acquire the cup of coffee. You then sipped your coffee and decided that, even though the coffee was not of an optimal temperature and the flavor had deteriorated through oxidation, it was acceptable. You then attempted to remember the exact agenda you came with tonight and weighed whether the dynamic inconsistency of shifting to the topic I found important was more or less desirable than...

LOEB: I get it. Just show me the pictures...