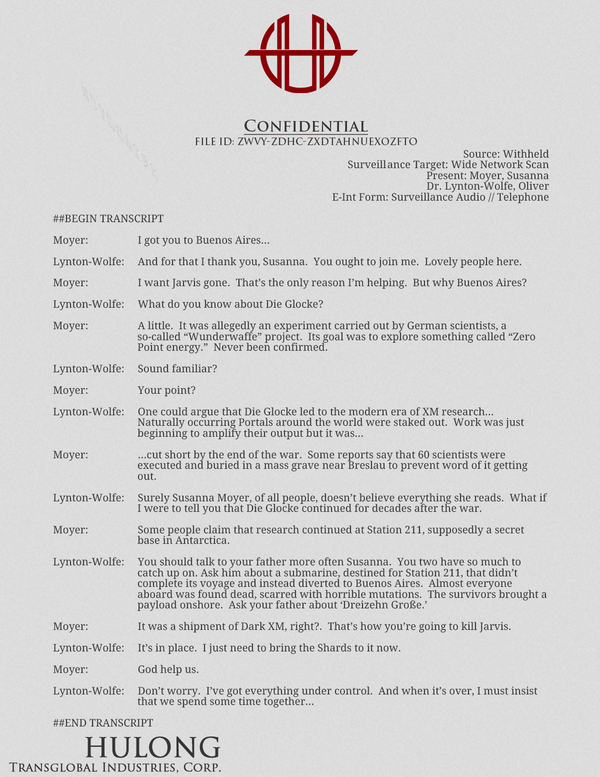 Light is shed on this controversial subject in a transcript obtained from +Hulong Transglobal today.

Lynton-Wolfe, it seems, plans to somehow leverage what may have been a World War II era project exploring what is now known as Exotic Matter in his bid to destroy the Shards of the Jarvis XM Entity.

Susanna Moyer's role in all this grows thicker by the day. It seems now that her father, a figure about whom very little is known, may be involved as well.

Why does Susanna Moyer have a stake in the destruction of the Jarvis Entity? What do we know about her past and her father? And this strange, so called 'Wunderwaffe' project? Is it a myth, a rumor or a deeply buried truth?

A passcode to those who enrich our conversation with meaningful insight, references and speculation.

Moyer: I got you to Buenos Aires...

Lynton-Wolfe: And for that I thank you, Susanna. You ought to join me. Lovely people here.

Moyer: I want Jarvis gone. That's the only reason I'm helping. But why Buenos Aires?

Lynton-Wolfe: What do you know about Die Glocke?

Moyer: A little. It was allegedly an experiment carried out by German scientists, a so-called "Wunderwaffe" project. Its goal was to explore something called "Zero Point energy." Never been confirmed.

Lynton-Wolfe: One could argue that Die Glocke led to the modern era of XM research... Naturally occurring Portals around the world were staked out. Work was just beginning to amplify their output but it was...

Moyer: ...cut short by the end of the war. Some reports say that 60 scientists were executed and buried in a mass grave near Breslau to prevent word of it getting out.

Lynton-Wolfe: Surely Susanna Moyer, of all people, doesn't believe everything she reads. What if I were to tell you that Die Glocke continued for decades after the war.

Moyer: Some people claim that research continued at Station 211, supposedly a secret base in Antarctica.

Lynton-Wolfe: You should talk to your father more often Susanna. You two have so much to catch up on. Ask him about a submarine, destined for Station 211, that didn't complete its voyage and instead diverted to Buenos Aires. Almost everyone aboard was found dead, scarred with horrible mutations. The survivors brought a payload onshore. Ask your father about 'Dreizehn Große'

Moyer: It was a shipment of Dark XM, right?. That's how you're going to kill Jarvis.

Lynton-Wolfe: It's in place. I just need to bring the Shards to it now.

Lynton-Wolfe: Don't worry. I've everything under control. And when it's over, I must insist that we spend some time together...