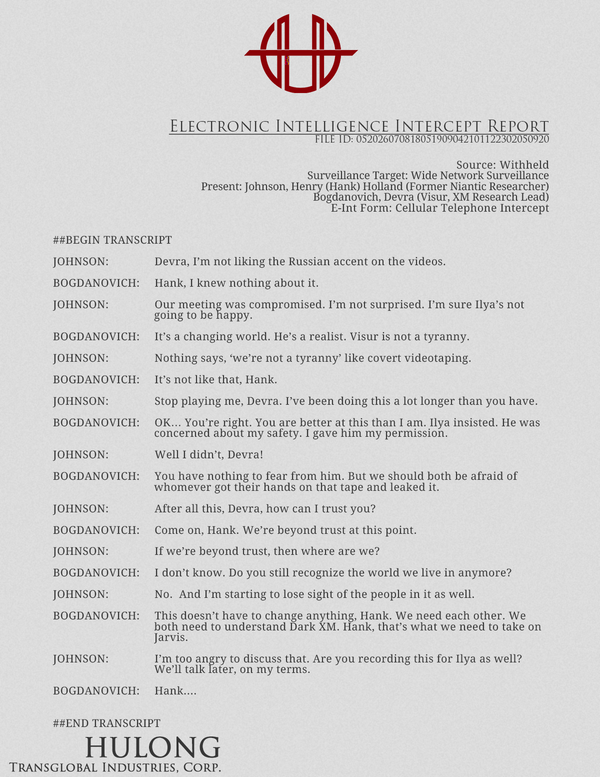 Niantic Project
2013/09/21 10:04:11(Google+)
The fallout from the leaked conversation between +Hank Johnson and Dr. +Devra Bogdanovich begins to surface.

When the videos were initially released, I had a feeling that the voice of the surveillance operator may be relevant. It turned out I may have been right: An Investigator shared his translation of the last sentences in the third video as something along the lines of 'Excellent Work, Devra.'.

While Devra does come clean to Hank on her role in the recording of their conversation in this document, it seems to me there may be another layer to the puzzle.

What's interesting is that despite this betrayal of confidence, the collective goal seems to remain intact. Dark XM, and Jarvis.

There's much to process here. Why are Hank and Devra working together? They fall on opposite sides of the Factional divide... Why Dark XM? It's a barely understood realm of science... Does it tie into Devra's XM testing of Human subjects at +Visur Technology, or something else? And what about Jarvis?

I look forward to your assistance in piecing this all together. A passcode, as always, to those who contribute thoughtfully to our discussion.

JOHNSON: Devra, I'm not liking the Russian accent on the videos.

BOGDANOVICH: Hank, I knew nothing about it.

JOHNSON: Our meeting was compromised. I'm not surprised. I'm sure Ilya's not going to be nappy.

BOGDANOVICH: It's a changing world. He's a realist. Visur is not a tyranny.

JOHNSON: Nothing says, 'we're not a tyranny' like covert videotaping.

JOHNSON: Stop playing me, Devra. I've been doing this a lot longer than you have.

BOGDANOVICH: OK ... You're right. You are better at this than I am. Ilya insisted. He was concerned about my safety. I gave him my permission.

BOGDANOVICH: You have nothing to fear from him. But we should both be afraid of whomever got their hands on that tape and leaked it.

JOHNSON: After all this, Devra, how can I trust you?

BOGDANOVICH: Come on, Hank. We're beyond trust at this point.

JOHNSON: If we're beyond trust, then where are we?

BOGDANOVICH: I don' t know. Do you still recognize the world we live in anymore?

JOHNSON: No. And I'm starting to lose sight of the people in it as well.

BOGDANOVICH: This doesn't have to change anything, Hank. We need each other. We both need to understand Dark XM. Hank, that's what we need to take on Jarvis.

JOHNSON: I'm too angry to discuss that. Are you recording this for Ilya as well? We'll talk later, on my terms.