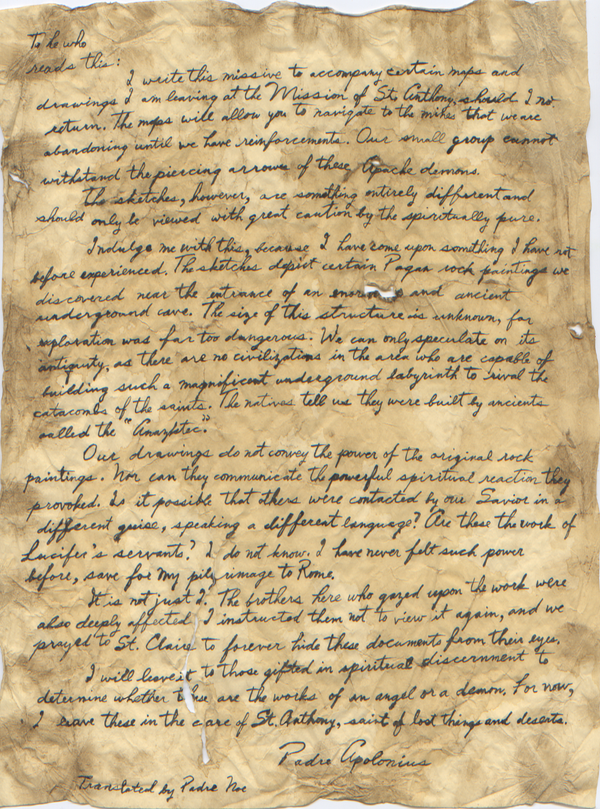 This previously undiscovered letter is believed to have been Jim Bowie's guide in his hunt for the San Saba mines.

From what I can tell, the mines Robert E. Howard was attempting to find are these same hidden mines. +Hank Johnson is now on that same trail as well.

+Felicia Hajra-Lee's novel, The Niantic Project: Ingress, is available on Google Play ( https://play.google.com/store/books/details?id=BKE4MsCPlX8C ) and in the Amazon e-book store ( http://www.amazon.com/The-Niantic-Project-Ingress-ebook/dp/B00CTSZQ9Q )To he who
reads this:

I write this missive to accompany certain maps and drawings I am leaving at the Mission of St. Anthony, should I no return. The maps will allow you to navigate to the mines that we are abandoning until we have reinforcements. Our small group cannot withstand the piercing arrow of there Apache demons.
The sketches, however, are something entirely different and should only be viewed with great caution by the spiritually pure.
Indulge me with this, becouse I have come upon something I have not before experienced. The sketches depict certain Pagan rock paintings we discovered near the entrance of an enor(xxxx) and ancient underground cave. The size of this structure is unknown, for exploration was for too dangerous. We can only speculate on its antiqruty(antiquity?), as there are no civilizations in the area who are capable of building such a magnificent underground labyrinth to rival the catacombs of the saints. The natives tell us they were built by ancients called the "Anazktec."
Our drawings do not convey the power of the original rock paintings. Nor can they communicate the powerful spiritual reaction they provoked. Is it possible that others were contacted by our Savior in a different guise, speaking a different language? Are there the work of Lucifer's servants? I do not know. I have never felt such power before, save for my pilgrimage to Rome.
It is not just I. The brothers here who gazed upon the work were also deeply affected I instructed them not to view it again, and we prayed to St. Claire to forever hide these documents from their eyes.
I will leave it to those gifted in spiritual discernment to determine whether these are the works of an angel or a demon, for now, I leave these in the care of St. Anthony, saint of loot things and deserts.
Padre Apolonius