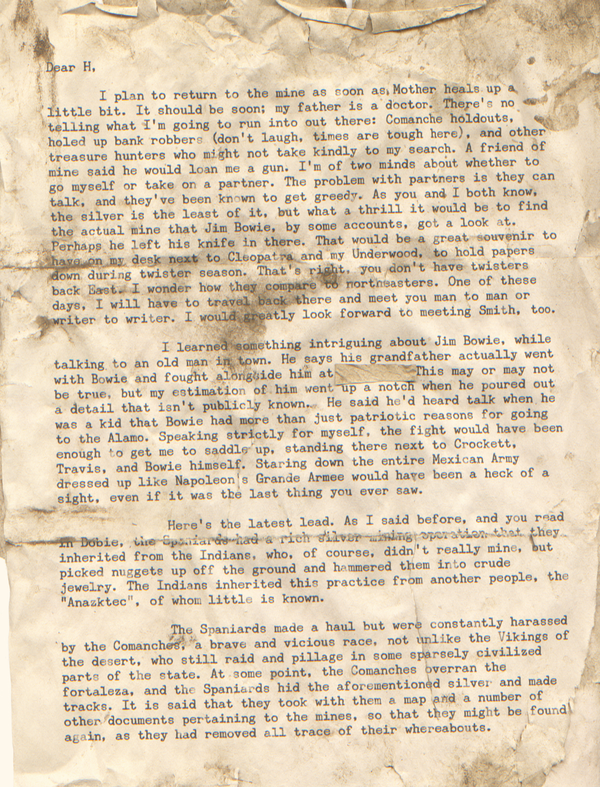 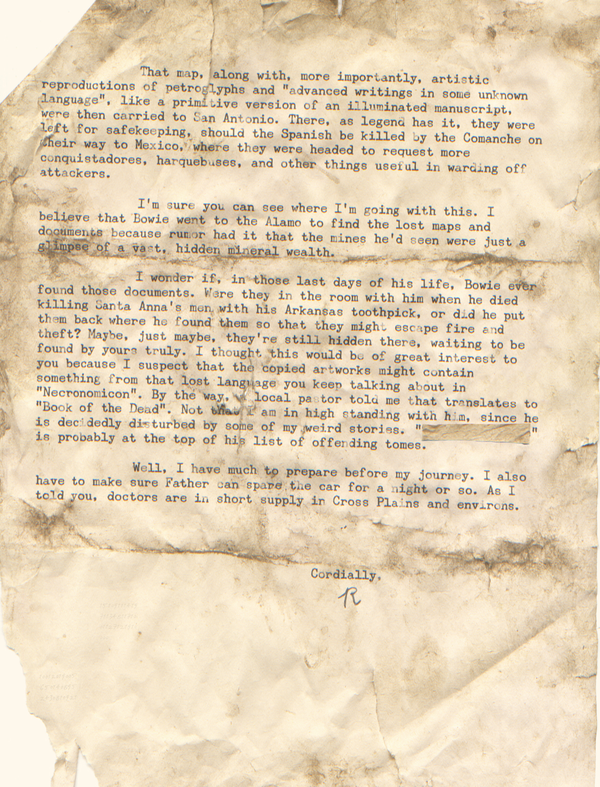 Hank Johnson
2013/06/11 08:39:06
i'll post when i can. bad connections out here and a lot of data to send. not to mention the fact that an occasional bullet is whizzing past me. i've got a pretty good idea where the mine is, and i've got a pretty good idea what i'm going to find there. see if you came to the same conclusions about what howard is alluding to that i am... i see jim bowie's name and i think i know where this story ends.

I plan to return to the mine as soon as Mother heals up a little bit. It should be soon; my father is a doctor. There's no telling what I'm going to run into out there: Comanche holdouts, holed up bank robbers (don't laugh, times are tough here), and other treasure hunters who might not take kindly to my search. A friend of mine said he would loan me a gun. I'm of two minds about whether to go myself or take on a partner. The problem with partners is they can talk, and they've been known to get greedy. As you and I both know, the silver is the least of it, but what a thrill it would be to find the actual mine that Jim Bowie, by some accounts, got a look at. Perhaps he left his knife in there. That would be a great souvenir to have on my desk next to Cleopatra and my Underwood, to hold papers down during twister season. That's right, you don't have twisters back East. I wonder how they compare to northeasters. One of these days, I will have to travel back there and meet you man to man or writer to writer. I would greatly look forward to meeting Smith, too.

I learned something intriguing about Jim Bowie, while talking to an old man in town. He says his grandfather actually went with Bowie and fought alongside him at [BLOTTED OUT]. This may or may not be true, but my estimation of him went up a notch when he poured out a detail that isn't publicly known. He said he'd heard talk when he was a kid that Bowie had more than just patriotic reasons for going to the Alamo. Speaking strictly for myself, the fight would have been enough to get me to saddle up, standing there next to Crockett, Travis, and Bowie himself. Staring down the entire Mexican Army dressed up like Napoleon's Grande Armee would have been a heck of a sight, even if it was the last thing you ever saw.

Here's the latest lead. As I said before, and you read in Dobie, the Spaniards had a rich silver mining operation that they inherited from the Indians, who, of course, didn't really mine, but picked nuggets up off the ground and hammered them into crude jewelry. The Indians inherited this practice from another people, the "Anazktec," of whom little is known.

The Spaniards made a haul but were constantly harassed by the Comanches, a brave and vicious race, not unlike the Vikings of the desert, who still raid and pillage in some sparsely civilized parts of the state. At some point, the Comanches overran the fortaleza, and the Spaniards hid the aforementioned silver and made tracks. It is said that they took with them a map and a number of other documents pertaining to the mines, so that they might be found again, as they had removed all trace of their whereabouts.That map, along with, more importantly, artistic reproductions of petroglyphs and "advanced writings in some unknown language," like a primitive version of an illuminated manuscript, were then carried to San Antonio. There, as legend has it, they were left for safekeeping, should the Spanish be killed by the Comanche on their way to Mexico, where they were headed to request more conquistadores, harquebuses, and other things useful to warding off attackers.

I'm sure you can see where I'm going with this. I believe that Bowie went to the Alamo to find the lost maps and documents because rumor had it that the mines he'd seen were just a glimpse of a vast, hidden mineral wealth.

I wonder if, in those last days of his life, Bowie ever found these documents. Were they in the room with him when he died killing Santa Anna's men with his Arkansas toothpick, or did he put them back where he found them so that they might escape fire and theft? Maybe, just maybe, they're still hidden there, waiting to be found by yours truly. I thought this would be of great interest to you because I suspect that the copied artworks might contain something from that lost language you keep talking about in "Necronomicon." By the way, a local pastor told me that translates to "Book of the Dead." Not that I am in high standing with him, since he is decidedly disturbed by some of my weird stories. "[BLOTTED OUT]" is probably at the top of his list of offending tomes.

Well, I have much to prepare before my journey. I also have to make sure Father can spare the car for a night or so. As I told you, doctors are in short supply in Cross Plains and environs.

RNiantic Project
2013/06/11 09:03:11
Anyone who's been following recent developments knows that Carrie Campbell sent +Hank Johnson on a glyph hunt at a major ( #ingressdays ) anomaly at the Robert E. Howard Museum in Cross Plains, Texas this week, 77 years after REH's suicide.

If you don't know about Howard, look it up, will be important. Get in touch with your inner HPL while you're at it. Right now, the important thing is to take a look at HJ's post. He's on the run... hunted. Possibly by the same people who were after him in Africa. I think he's looking for the San Saba mines, but not for the reason you might think.