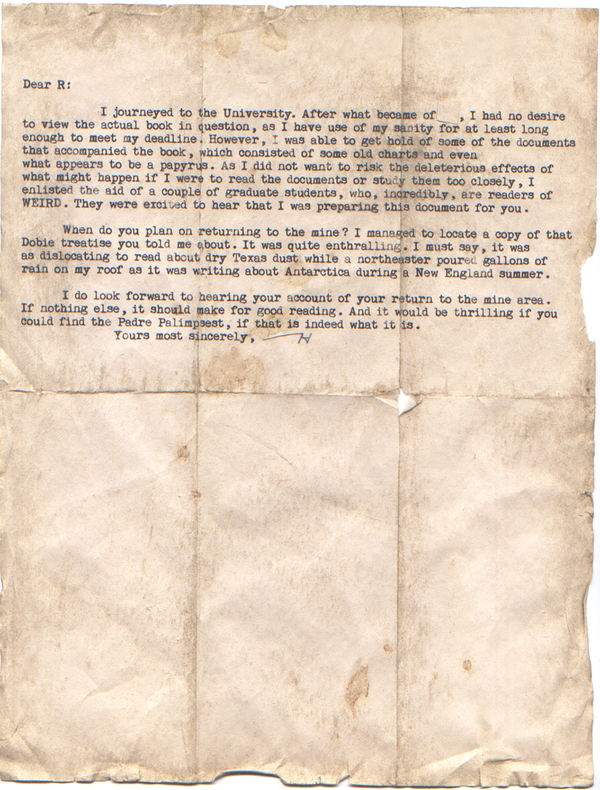 An unusual set of artifacts emerged from the many investigators present for the Cross Plains anomaly: A series of lost letters between two individuals, named 'R' and 'H'. +Hank Johnson may have found them while exploring the area.

The Enlightened have established early dominance during the #ingressdays anomaly. Two measurements left, will the Resistance be able to reclaim the day?

I journeyed to the University. After what became of ???, I had no desire to view the actual book in question, as I have use of my sanity for at least long enough to meet my deadline. However, I was able to get hold of some of the documents that accompanied the book, which consisted of some old charts and even what appears to be a papyrus. As I did not want to risk the deleterious effects of what might happen if I were to read the documents or study them too closely, I enlisted the aid of a couple of graduate students, who, incredibly, are readers of WEIRD. They were excited to hear that I was preparing this document for you.

When do you plan on returning to the mine? I managed to locate a copy of that Dobie treatise you told me about. It was quite enthralling. I must say, it was as dislocating to read about dry Texas dust while a northeaster poured gallons of rain on my roof as it was writing about Antarctica during a New England summer.

I do look forward to hearing your account of your return to the mine area. If nothing else, it should make for good reading. And it would be thrilling if you could find the Padre Palimpsest, if that is indeed what it is.
Yours most sincerely --H