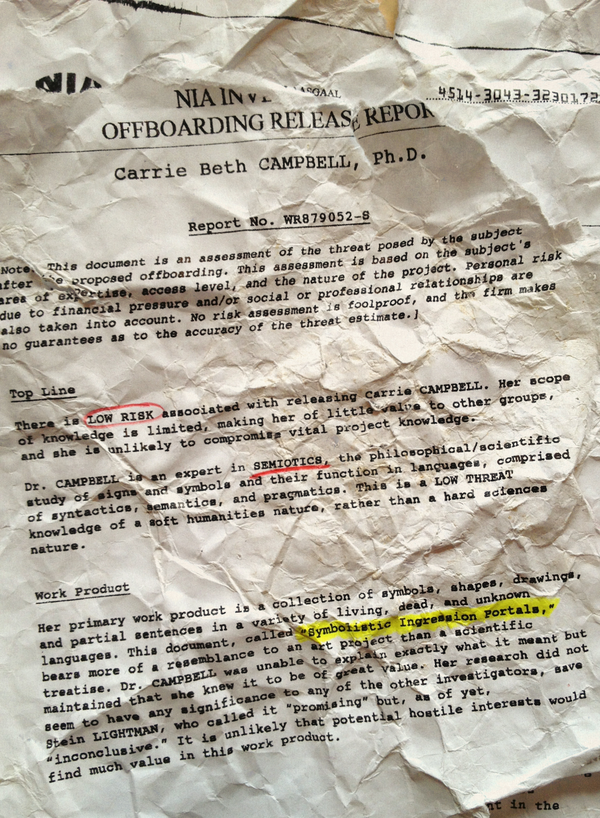 Since the Niantic shutdown, NIA leaks have been few and far between. Former director Ni left and found new opportunities, and threats, elsewhere (as revealed in The Niantic Project: Ingress), and there are rumors that a person the investigative community is familiar with has taken the NIA's helm in her stead.

[ Note. This document is an assessment of the threat posed by the subject after the proposed offboarding. This assessment is based on the subject's area of expertise, access level, and the nature of the project. Personal risk due to financial pressure and/or social or professional relationships are also taken into account. No risk assessment is foolproof, and the firm makes no guarantees as to the accuracy of the threat estimate. ]

There is LOW RISK associated with releasing Carrie CAMPBELL. Her scope of knowledge is limited, making her of little value to other groups, and she is unlikely to compromise vital project knowledge.

Dr. CAMPBELL is an expert in SEMIOTICS, the philosophical/scientific study of signs and symbols and their function in languages, comprised of syntactics, semantics, and pragmatics. This is a LOW THREAT knowledge of a soft humanities nature, rather than a hard sciences nature.

Her primary work product is a collection of symbols, shapes, drawings, and partial sentences in a variety of living, dead, and unknown languages. This document, called "Symbolistic Ingression Portals," bears more of a resemblance to an art project than a scientific treatise. Dr. CAMPBELL was unable to explain exactly what it meant but maintained that she knew it to be of great value. Her research did not seem to have any significance to any of the other investigators, save Stein LIGHTMAN, who called it "promising" but, as of yet, "inconclusive." It is unlikely that potential hostile interests would find much value in this work product.

Other researchers thought that perhaps Dr. CAMPBELL was showing stress fatigue from the rigors of the project and possibly exposure to XM, though we acknowledge the official position that there has been no proven, reproducible negative effect of exposure to XM.

We have no reason to believe that Dr. CAMPBELL represents a threat to national security and concur with Ken OWEN'S recommendations to release her. She should be channeled to PTSD counseling. We also recommend three months of 24 x 7 physical surveillance and a standard SIGINT package on Internet and cell phone.

TOP LINE
After interviewing Dr. Campbell and the other suspects and reviewing incident-scene reconstruction and forensic evaluation, we are prepared to clear Carrie Beth Campbell of any involvement in the accidental or intentional death of Dr. Victor Kureze.