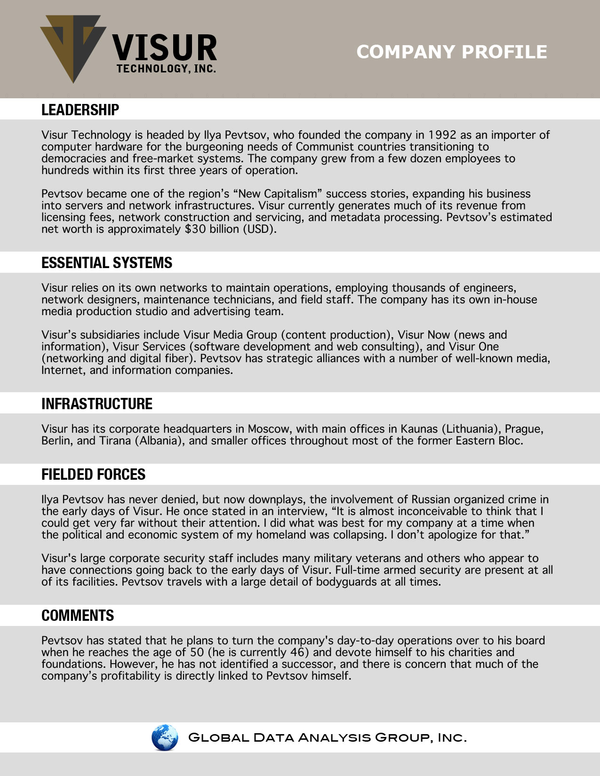 Visur Technology is headed by llya Pevtsov, who founded the company in 1992 as an importer of computer hardware for the burgeoning needs of Communist countries transitioning to democracies and free-market systems. The company grew from a few dozen employees to hundreds within its first three years of operation.

Pevtsov became one of the region's "New Capitalism" success stories, expanding his business into servers and network infrastructures. Visur currently generates much of its revenue from licensing fees, network construction and servicing, and metadata processing. Pevtsov's estimated net worth is approximately $30 billion (USD).

Visur relies on its own networks to maintain operations, employing thousands of engineers, network designers, maintenance technicians, and field staff. The company has its own in-house media production studio and advertising team.

(networking and digital fiber). Pevtsov has strategic alliances with a number of well-known media, Internet, and information companies.

Visur has its corporate headquarters in Moscow, with main offices in Kaunas (Lithuania), Prague, Berlin, and Tirana (Albania), and smaller offices throughout most of the former Eastern Bloc.

llya Pevtsov has never denied, but now downplays, the involvement of Russian organized crime in the early days of Visur. He once stated in an interview, "It is almost inconceivable to think that I could get very far without their attention. I did what was best for my company at a time when the political and economic system of my homeland was collapsing. I don't apologize for that."

Visur's large corporate security staff includes many military veterans and others who appear to have connections going back to the early days of Visur. Full-time armed security are present at all of its facilities. Pevtsov travels with a large detail of bodyguards at all times.

Pevtsov has stated that he plans to turn the company's day-to-day operations over to his board when he reaches the age of 50 (he is currently 46) and devote himself to his charities and foundations. However, he has not identified a successor, and there is concern that much of the company's profitability is directly linked to Pevtsov himself.