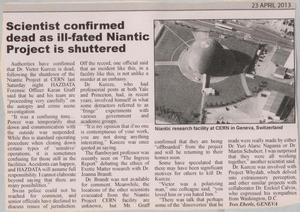 A local newspaper article begins to fill in the missing pieces of the HAZDATA takeover of the Niantic Facility, and the death (or murder) of Dr. Victor Kureze.

Authorities have confirmed that Dr. Victor Kureze is dead, following the shutdown of the Niantic Project at CERN last Saturday night. HAZDATA Forensic Officer Karan Graff said that he and his team are "proceeding very carefully" on the autopsy and crime scene investigation.
"It was a confusing time... Power was temporarily shut down and communication with the outside was suspended. While this is standard operating procedure when closing down certain types of 'sensitive' operations, it is sometimes confusing for those still in the facilities. Accidents can happen, and HAZDATA will assume full responsibility. I cannot elaborate beyond saying that there are many possibilities."
Swiss police could not be reached for comment, and senior officials have declined to discuss issues of jurisdiction. Off the record, one official said that an incident like this, in a facility like this, is not unlike a murdder at an embassy.
Dr. Kureze, who had professorial posts at both Yale and Princeton, had, in recent years, involved himself in what some detractors referred to as "fringe" experiments with various government and academic groups.
"It is my opinion that if no one is contemptuous of your work, you are not doing anything interesting," Kureze was once quoted as saying.
The flamboyant professor was recently seen on "The Ingress Report" debating the ethics of Exotic Matter research with Dr. Jaonna Brandt.
Dr. Brandt was not available for comment. Meanwhile, the locations of the other scientists evacuated from the Niantic Project CERN facility are unknown, but Mr. Graff comfirmed that they are being "offboarded" from the project and will be returning to their homes soon.
Some have speculated that there may have been significant motives for others to kill Dr. Kureze.
"Victor was a polarizing man," one colleague said, "you loved him or you hated him."
"There was talk that perhaps some of the 'discoveries' that he made were really made by either Dr. Yuri Alaric Nagassa or Dr. Martin Schubert. I was surprised that they were all working together," another scientist said.
Dr. Kureze was involved with Project Whydah, which delved into extrasensory perception, and other similar projects with collaborator Dr. Ezekiel Calvin, who expressed his sympathies from Washington, D.C.