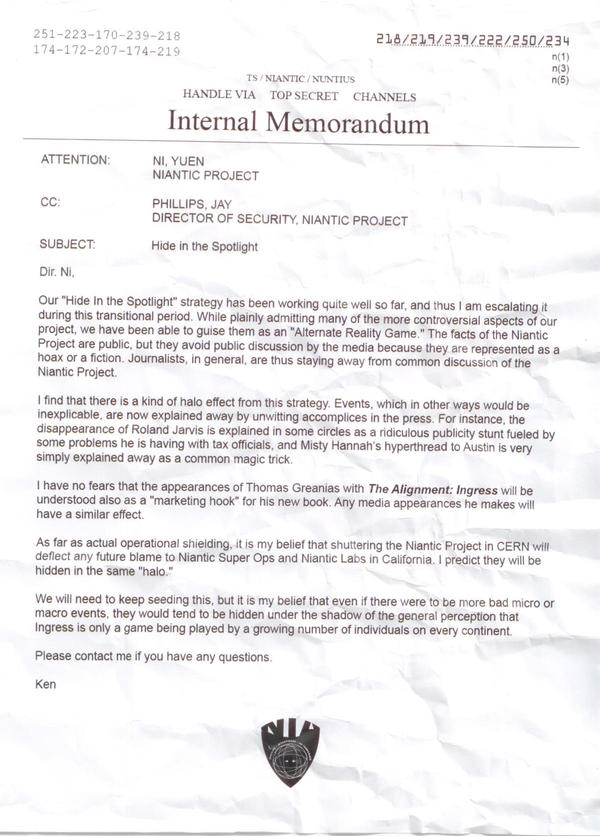 Hide in the Spotlight

SUBJECT: Hide in the Spotlight

Our "Hide In the Spotlight" strategy has been working quite well so far, and thus I am escalating it during this transitional period. While plainly admitting many of the more controversial aspects of our project, we have been able to guise them as an "Alternate Reality Game." The facts of the Niantic Project are public, but they avoid public discussion by the media because they are represented as a hoax or a fiction. Journalists, in general, are thus staying away from common discussion of the Niantic Project.

I find that there is a kind of halo effect from this strategy. Events, which in other ways would be inexplicable, are now explained away by unwitting accomplices in the press. For instance, the disappearance of Roland Jarvis is explained in some circles as a ridiculous publicity stunt fueled by some problems he is having with tax officials, and Misty Hannah's hyperthread to Austin is very simply explained away as a common magic trick.

I have no fears that the appearances of Thomas Greanias with The Alignment: Ingress will be understood also as a "marketing hook" for his new book. Any media appearances he makes will have a similar effect.

As far as actual operational shielding, it is my belief that shuttering the Niantic Project in CERN will deflect any future blame to Niantic Super Ops and Niantic Labs in California. I predict they will be hidden in the same "halo."

We will need to keep seeding this, but it is my belief that even if there were to be more bad micro or macro events, they would tend to be hidden under the shadow of the general perception that Ingress is only a game being played by a growing number of individuals on every continent.

Barium? False flag? Damage Control? Your guess is as good as mine.

Continued movement on the Europe front as alliances begin to form internationally to manage the mission announced by Curter Zokiev on April 21 in Geneva ( http://goo.gl/4eYC9 ).

See the document on the Board at: http://www.nianticproject.com/?id=sc510a