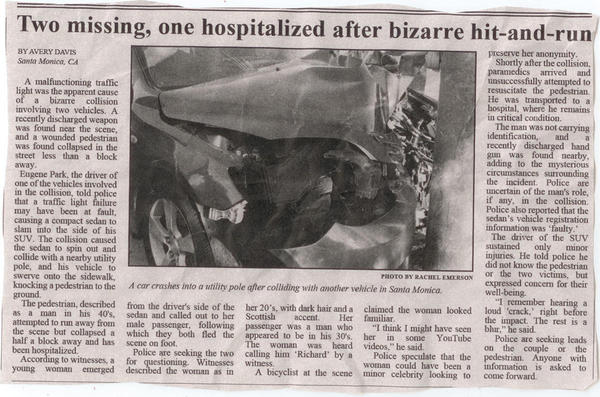 A car crashes into a utility pole after colliding with another vehicle in Santa Monica.

A malfunctioning traffic light was the apparent cause of a bizarre collision involving two vehicles. A recently discharged weapon was found near the scene, and a wounded pedestrian was found collapsed in the street less than a block away.

Eugene Park, the driver of one of the vehicles involved in the collision, told police that a traffic light failure may have been at fault, causing a compact sedan to slam into the side of his SUV. The collision caused the sedan to spin out and collide with a nearby utility pole, and his vehicle to swerve onto the sidewalk, knocking a pedestrian to the ground.

The pedestrian, described as a man in his 40's, attempted to run away from the scene but collapsed a half a block away and has been hospitalized.

According to witnesses, a young woman emerged from the driver's side of the sedan and called out to her male passenger, following which they both fled the scene on foot.

Police are seeking the two for questioning. Witnesses described the woman as in her 20's with dark hair and a Scottish accent. Her passenger was a man who appeared to be in his 30's. The woman was heard calling him 'Richard' by a witness.

A bicyclist at the scene claimed the woman looked familiar.

Police speculate that the woman could have been a minor celebrity looking to preserve her anonymity.

Shortly after the collision, paramedics arrived and unsuccessfully attempted to resuscitate the pedestrian. He was transported to a hospital, where he remains in critical condition.

The man was not carrying identification, and a recently discharge hand gun was found nearby, adding to the mysterious circumstances surrounding the incident. Police are uncertain of the man's role, if any, in the collision. Police also reported that the sedan's vehicle registration information was 'faulty.'

The driver of the SUV sustained only minor injuries. He told police did not know the pedestrian of the two victims, but expressed concern for their well-being.

"I remember hearing a loud 'crack,' right before the impact. The rest is a blur," he said.

Police are seeking leads on the couple or the pedestrian. Anyone with information is asked to come forward.

See it on the Investigation Board at: http://www.nianticproject.com/?id=sc507a