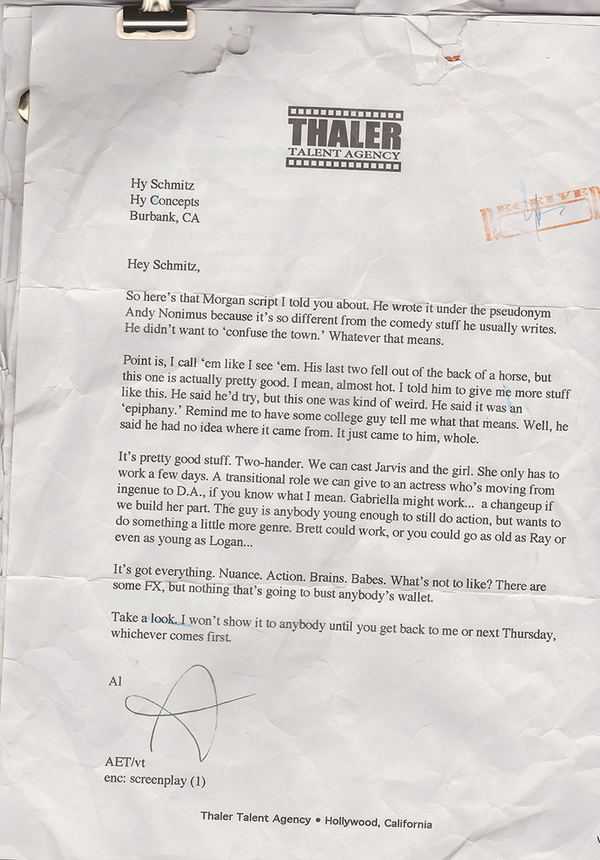 They date back probably more than a decade.

So here's that Morgan script I told you about. He wrote it under lhe pseudonym
Andy Nonimus because it's so different from the comedy stuff he usually writes.
He didn't want to 'confuse the town.' Whatever that means.

Point is, I call 'em like I see 'em. His last two fell out of the back of a horse, but
this one is actually pretty good. I mean, almost hot. I told him to give me more stuff
like this. He said he'd try, but this one was kind of weird. He said it was an
'epiphany.' Remind me to have some college guy tell me what that means. Well, he
said he had no idea where it came from. It just came to him, whole.

It's pretty good stuff. Two-hander. We can cast Jarvis and the girl. She only has to
work a few days. A transitional role we can give to an actress who's moving from
ingenue to D.A ., if you know what I mean. Gabriella might work... a changeup if
we build her part. The guy is anybody young enough to still do action, but wants to
do something a little more genre. Brett could work, or you could go as old as Ray or
even as young as Logan ...

It's got everything. Nuance. Action . Brains. Babes. What's not to like? There are
some FX, but nothing that's going to bust anybody's wallet.

Take a look,I won't show it to anybody until you get back to me or next Thursday,
whichever comes first