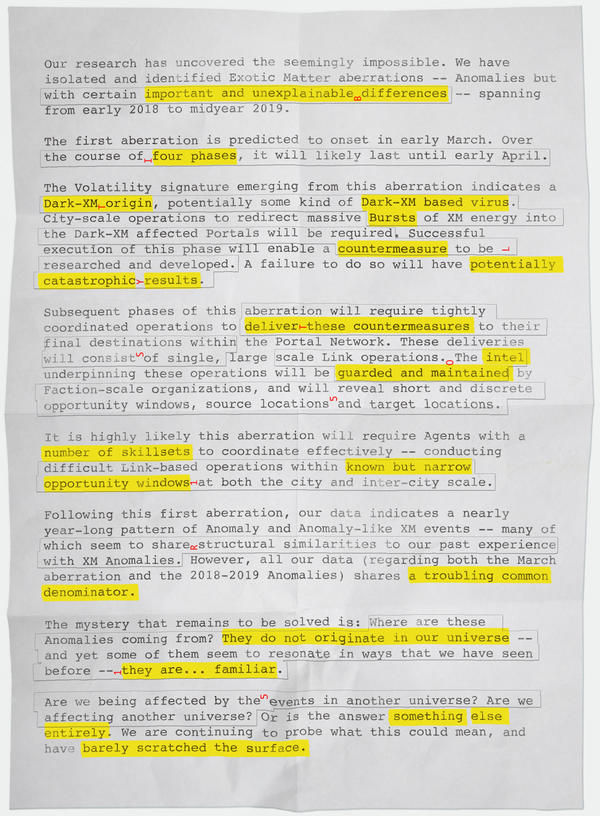 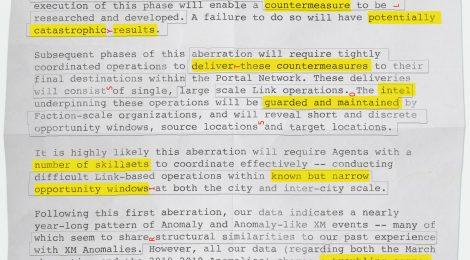 Pardon my absence, Investigators. I wish I could explain it away with an incredible story about being on the run, off the grid and being chased by big bad. Sometimes the truth is much more mundane, and involves fevers, shakes and antibiotics.

It seems, however, that you folks have been very, very busy in my absence...

The document below emerged, severely redacted, less than 24 hours ago. Within just a short amount of time, Agents of both Factions eviscerated the coded secrets hidden within it (ranging from simple morse, braille and caesar ciphers to tricky Mayan number and Base13 encodings).

Their quick work led to Portals around the world -- from Japan to Egypt to New Orleans -- where the previously redacted sections of the document were recovered.

Hidden even one layer deeper (the red letters you see in the doc), this video was found that reveals the current prediction data on the Ingress XM Anomalies through mid-2019.

The document itself though, sheds light more on near-term events -- an XM aberration in March -- as well as the troubling mystery that seems to permeate everything we've learned about the upcoming XM Anomalies and Events... their origin...

Our research has uncovered the seemingly impossble. We have isolated and identified Exotic Matter aberrations -- Anomalies but with certain important and unexplainable difference -- spanning from early 2018 to midyear 2019.

The first aberration is predicted to onset in early March. Over the course of four phases, it will likely last until early April.

The Volatility signature emerging from this aberration indicates a Dark-XM origin, potentially some kind of Dark-XM based virus. City-scale operations to redirect massive Bursts of XM energy into the Dark-XM affected Portals will be required. Successful execution of this phase will enable a countermeasure to be researched and developed. A failure to do so will have potentially catastrophic results.

Subsequent phases of this aberration will require tightly coordinated operations to deliver these countermeasures to their final destinations within the Portal Network. These deliveries will consist of single, large scale Link operations. The intel underpinning these operations will be guarded and maintained by Faction-scale organizations, and will reveal short and discrete opportunity windows, source locations and target locations.

It is highly likely this aberration will require Agents with a number of skillsets to coordinate effectively -- conducting difficult Link-based operations within known but narrow opportunity windows at both the city and inter-city scale.

Following this first aberration, our data indicates a nealy year-long pattern of Anomaly-like XM events -- many of which seem to share structural similarities to our past experience with XM Anomalies. However, all our data (regarding both the March aberration and the 2018-2019 Anomalies ) shares a troubling common denominator.

The mystery that remains to be solved is : Where are these Anomalies coming from? They do not originate in our universe -- and yet some of them seem to resonate in ways that we have seen before -- they are... familiar.

Are we being affected by the events in another universe? Are we affecting another universe? Or is the answer something else entirely. We are continuing to probe what this could mean, and have barely scratched the surface.

H. Richard Loeb
2018/02/14 21:00:44
The document below emerged, severely redacted, less than 24 hours ago. Within just a short amount of time, Agents of both Factions eviscerated the coded secrets hidden within it...