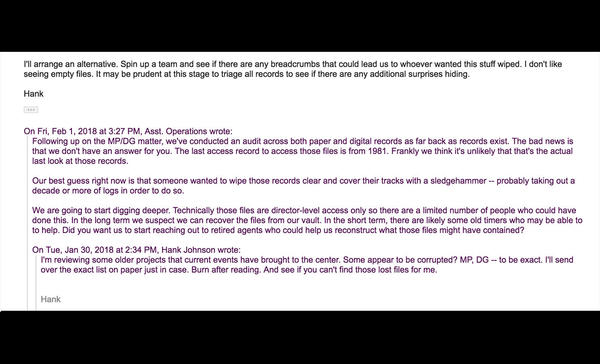 It appears some old files have gone missing at the NIA -- curious what Hank Johnson is digging into that someone wanted buried so deeply...

I'll arrange an alternative. Spin up a team and see if there are any breadcrumbs that could lead us to whoever wanted this stuff wiped. I don't like seeing empty files. It may be prudent at this stage to triage all records to see if there are any additional surprises hiding.

On Fri, Feb 1, 2018 at 3:27 PM, Asst. Operations wrote:
Following up on the MP/DG matter, we've conducted an audit across both paper and digital records as far back as records exist. The bad news is that we don't have an answer for you. The last access record to access those files is from 1981. Frankly we think it's unlikely that that's the actual last look at those records.

Our best guess right now is that someone wanted to wipe those records clear and cover their tracks with a sledgehammer -- probably taking out a decade or more of logs in order to do so.

We are going to start digging deeper. Technically those files are director-level access only so there are a limited number of people who could have done this. In the long term we suspect we can recover the files from our vault. In the short term, there are likely some old timers who may be able to to help. Did you want us to start reaching out to retired agents who could help us reconstruct what those files might have contained?

I'm reviewing some older projects that current events have brought to the center. Some appear to be corrupted? MP, DG -- to be exact. I'll send over the exact list on paper just in case. Burn after reading. And see if you can't find those lost files for me.