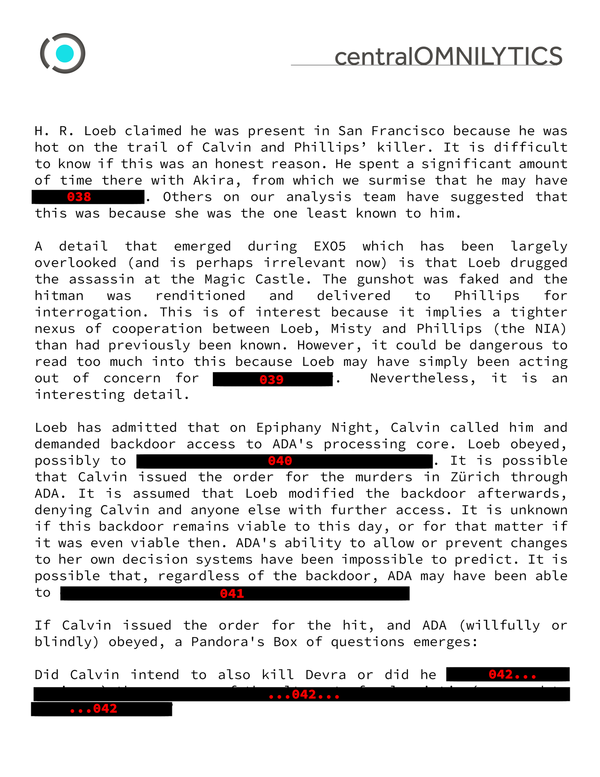 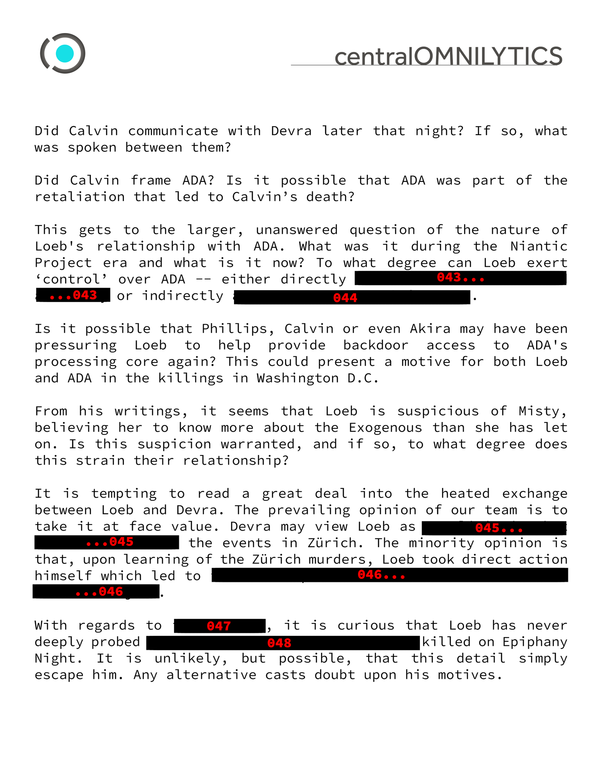 I suppose it was only a matter of time before it was my turn in the hot seat.

Page 1
centralOMNILYTICS
H. R. Loeb claimed he was present in San Francisco because he was hot on the trail of Calvin and Phillips' killer. It is difficult to know if this was an honest reason. He spent a significant amount of time there with Akira, from which we surmise that he may have XXXXX038XXXXX . Others on our analysis team have suggested that this was because she was the one least known to him.

A detail that emerged during EXO5 which has been largely overlooked (and is perhaps irrelevant now) is that Loeb drugged the assassin at the Magic Castle. The gunshot was faked and the hitman was renditioned and delivered to Phillips for interrogation. This is of interest because it implies a tighter nexus of cooperation between Loeb, Misty and Phillips (the NIA) than had previously been known. However, it could be dangerous to read too much into this because Loeb may have simply been acting out of concern for XXXXX039XXXXX . Nevertheless, it is an interesting detail.

Loeb has admitted that on Epiphany Night, Calvin called him and demanded backdoor access to ADA's processing core. Loeb obeyed, possibly to XXXXX040XXXXX . It is possible that Calvin issued the order for the murders in Zurich through ADA. It is assumed that Loeb modified the backdoor afterwards, denying Calvin and anyone else with further access. It is unknown if this backdoor remains viable to this day, or for that matter if it was even viable then. ADA's ability to allow or prevent changes to her own decision systems have been impossible to predict. It is possible that, regardless of the backdoor, ADA may have been able to XXXXX041XXXXX

If Calvin issued the order for the hit, and ADA (willfully or blindly) obeyed, a Pandora's Box of questions emerges:

Did Calvin intend to also kill Devra or did he XXXXX042XXXXX

Page2
centralOMNILYTICS
Did Calvin communicate with Devra later that night? If so, what was spoken between them?

Did Calvin frame ADA? Is it possible that ADA was part of the retaliation that led to Calvin's death?

This gets to the larger, unanswered question of the nature of Loeb's relationship with ADA. What was it during the Niantic Project era and what is it now? To what degree can Loeb exert 'control' over ADA -- either directly XXXXX043XXXXX or indirectly XXXXX044XXXXX .

Is it possible that Phillips, Calvin or even Akira may have been pressuring Loeb to help provide backdoor access to ADA's processing core again? This could present a motive for both Loeb and ADA in the killings in Washington D.C.

From his writings, it seems that Loeb is suspicious of Misty, believing her to know more about the Exogenous than she has let on. Is this suspicion warranted, and if so, to what degree does this strain their relationship?

It is tempting to read a great deal into the heated exchange between Loeb and Devra. The prevailing opinion of our team is to take it at face value. Devra may view Loeb as XXXXX045XXXXX the events in Zurich. The minority opinion is that, upon learning of the Zurich murders, Loeb took direct action himself which led to XXXXX046XXXXX .

With regards to XXXXX047XXXXX , it is curious that Loeb has never deeply probed XXXXX048XXXXX killed on Epiphany Night. It is unlikely, but possible, that this detail simply escape him. Any alternative casts doubt upon his motives.