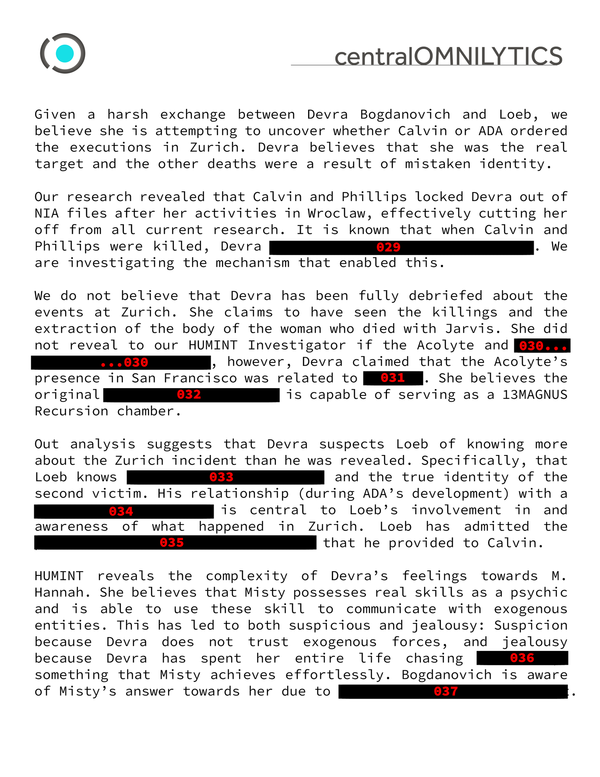 The Redacted Report turns its focus to Devra Bogdanovich.

Given a harsh exchange between Devra Bogdanovich and Loeb, we believe she is attempting to uncover whether Calvin or ADA ordered the executions in Zurich. Devra believes that she was the real target and the other deaths were a result of mistaken identity.

Our research revealed that Calvin and Phillips locked Devra out of NIA files after her activities in Wroclaw, effectively cutting her off from all current research. It is known that when Calvin and Phillips were killed, Devra XXXXX029XXXXX . We are investigating the mechanism that enabled this.

We do not believe that Devra has been fully debriefed about the events at Zurich. She claims to have seen the killings and the extraction of the body of the woman who died with Jarvis. She did not reveal to our HUMINT Investigator if the Acolyte and XXXXX030XXXXX , however, Devra claimed that the Acolyte's presence in San Francisco was related to XXXXX031XXXXX . She believes the original XXXXX032XXXXX is capable of serving as a 13MAGNUS Recursion chamber.

Out analysis suggests that Devra suspects Loeb of knowing more about the Zurich incident than he was revealed. Specifically, that Loeb knows XXXXX033XXXXX and the true identity of the second victim. His relationship (during ADA's development) with a XXXXX034XXXXX is central to Loeb's involvement in and awareness of what happened in Zurich. Loeb has admitted the XXXXX035XXXXX that he provided to Calvin.

HUMINT reveals the complexity of Devra's feelings towards M. Hannah. She believes that Misty possesses real skills as a psychic and is able to use these skill to communicate with exogenous entities. This has led to both suspicious and jealousy: Suspicion because Devra does not trust exogenous forces, and jealousy because Devra has spent her entire life chasing XXXXX036XXXXX something that Misty achieves effortlessly. Bogdanovich is aware of Misty's answer towards her due to XXXXX037XXXXX .