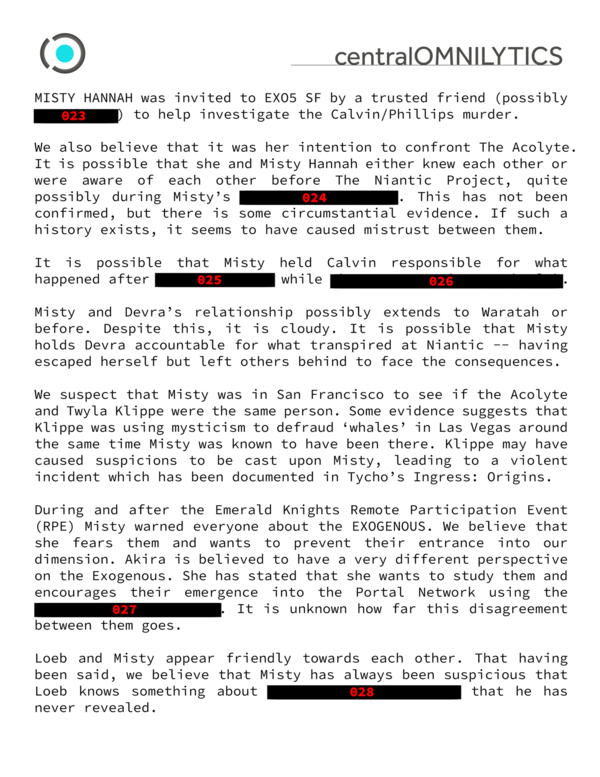 A short but enigmatic conversation with Wright -- he claimed to have nothing to do with The Redacted Report but mentioned off hand that the Agents who can fill in the most blanks optimally may be someday have a chance to prove this and be rewarded...

Take that with a grain of salt. Once can never quite know if Wright's tuned in or tuned out at any given moment...

MISTY HANNAH was invited to EXOS SF by a trusted friend (possibly XXXXX023XXXXX ) to help investigate the Calvin/Phillips murder.

We also believe that it was her intention to confront The Acolyte. It is possible that she and Misty Hannah either knew each other or were aware of each other before The Niantic Project, quite possibly during Misty's XXXXX024XXXXX . This has not been confirmed, but there is some circumstantial evidence. If such a history exists, it seems to have caused mistrust between them.

It is possible that Misty held Calvin responsible for what happened after XXXXX025XXXXX while XXXXX026XXXXX .

Misty and Devra's relationship possibly extends to Waratah or before. Despite this, it is cloudy. It is possible that Misty holds Devra accountable for what transpired at Niantic -- having escaped herself but left others behind to face the consequences.

We suspect that Misty was in San Francisco to see if the Acolyte and Twyla Klippe were the same person. Some evidence suggests that Klippe was using mysticism to defraud 'whales' in Las Vegas around the same time Misty was known to have been there. Klippe may have caused suspicions to be cast upon Misty, leading to a violent incident which has been documented in Tycho's Ingress: Origins.

During and after the Emerald Knights Remote Participation Event (RPE) Misty warned everyone about the EXOGENOUS. We believe that she fears them and wants to prevent their entrance into our dimension. Akira is believed to have a very different perspective on the Exogenous. She has stated that she wants to study them and encourages their emergence into the Portal Network using the XXXXX027XXXXX . It is unknown how far this disagreement between them goes.

Loeb and Misty appear friendly towards each other. That having been said, we believe that Misty has always been suspicious that Loeb knows something about XXXXX028XXXXX that he has never revealed.