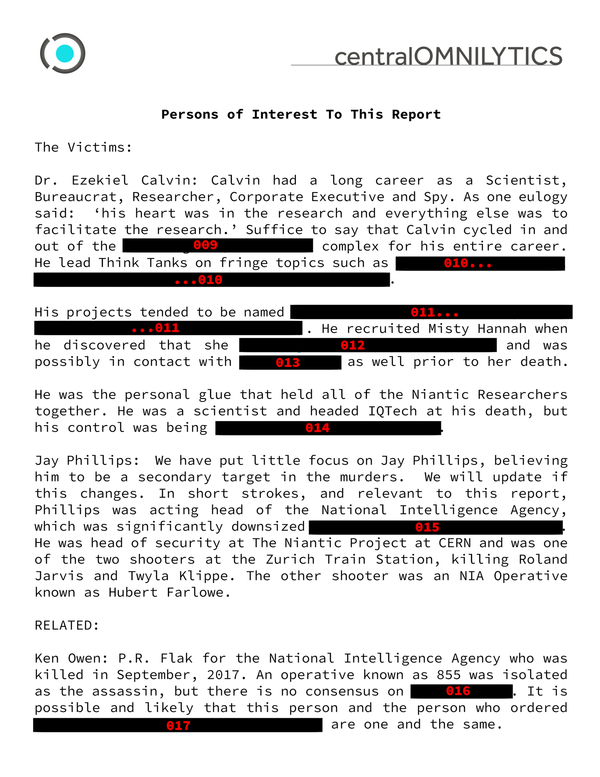 My source tells me these numbered redactions may be part of some kind of classified research... Still looking for more details. Wright might be involved? Will keep you posted...

centralOMNILYTICS
Persons of Interest To This Report

Dr. Ezekiel Calvin: Calvin had a long career as a Scientist, Bureaucrat, Researcher, Corporate Executive and Spy. As one eulogy said: 'his heart was in the research and everything else was to facilitate the research.' Suffice to say that Calvin cycled in and out of the XXXXX009XXXXX complex for his entire career. He lead Think Tanks on fringe topics such as XXXXX010XXXXX .

His projects tended to be named XXXXX011XXXXX . He recruited Misty Hannah when he discovered that she XXXXX012XXXXX and was possibly in contact with XXXXX013XXXXX as well prior to her death.

He was the personal glue that held all of the Niantic Researchers together. He was a scientist and headed IQTech at his death, but his control was being XXXXX014XXXXX .

Jay Phillips: We have put little focus on Jay Phillips, believing him to be a secondary target in the murders. We will update if this changes. In short strokes, and relevant to this report, Phillips was acting head of the National Intelligence Agency, which was significantly downsized XXXXX015XXXXX . He was head of security at The Niantic Project at CERN and was one of the two shooters at the Zurich Train Station, killing Roland Jarvis and Twyla Klippe. The other shooter was an NIA Operative known as Hubert Farlowe.

Ken Owen: P.R. Flak for the National Intelligence Agency who was killed in September, 2017. An operative known as 855 was isolated as the assassin, but there is no consensus on XXXXX016XXXXX . It is possible and likely that this person and the person who ordered XXXXX017XXXXX are one and the same.

H. Richard Loeb
2018/01/02 15:34:20
My source tells me these numbered redactions may be part of some kind of classified research... Still looking for more details. Wright might be involved? Will keep you posted...