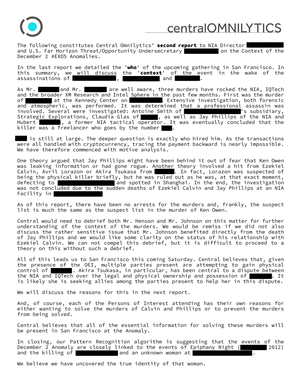 Here's the second report by an Intel Analysis group on the upcoming Anomaly -- and apparently -- how it might connect to another momentous night in the history of Ingress...

Once again, Agents: I'm making you fill in the blanks...

In the last report we detailed the 'who' of the upcoming gathering in San Francisco. In this summary, we will discuss the 'context' of the event in the wake of the assassinations of REDACTED, REDACTED and REDACTED.

As Mr. REDACTED and Mr. REDACTED are well aware, three murders have rocked the NIA, IQTech and the broader XM Research and Intel Sphere in the past few months. First was the murder of REDACTED at the Kennedy Center on REDACTED. Extensive investigation, both forensic and atmospheric, was performed. It was determined that a professional assassin was involved. Several were investigated: Antoine Smith of REDACTED subsidiary, Strategic Explorations, Claudia Glas of REDACTED, as well as Jay Phillips of the NIA and Hubert REDACTED, a former NIA tactical operator. It was eventually concluded that the killer was a freelancer who goes by the number REDACTED.

REDACTED is still at large. The deeper question is exactly who hired him. As the transactions were all handled with cryptocurrency, tracing the payment backward is nearly impossible. We have therefore commenced with motive analysis.

One theory argued that Jay Phillips might have been behind it out of fear that Ken Owen was leaking information or had gone rogue. Another theory involved a hit from Ezekiel Calvin, Avril Lorazon or Akira Tsukasa from REDACTED. In fact, Lorazon was suspected of being the physical killer briefly, but he was ruled out as he was, at that exact moment, defecting to REDACTED and spotted in Shanghai. In the end, the investigation was not concluded due to the sudden deaths of Ezekiel Calvin and Jay Phillips at an NIA Facility in REDACTED

Central would need to debrief both Mr. Henson and Mr. Johnson on this matter for further understanding of the context of the murders. We would be remiss if we did not also discuss the rather sensitive issue that Mr. Johnson benefited directly from the death of Jay Phillips and we would like some clarity on the status of his relationship with Ezekiel Calvin. We can not compel this debrief, but it is difficult to proceed to a theory on this without such a debrief.

All of this leads us to San Francisco this coming Saturday. Central believes that, given the presence of the OEI, multiple parties present are attempting to gain physical control of REDACTED. Akira Tsukasa, in particular, has been central to a dispute between the NIA and IQTech over the legal and physical ownership and possession of REDACTED. It is likely she is seeking allies among the parties present to help her in this dispute.

We will discuss the reasons for this in the next report.

And, of course, each of the Persons of Interest attending has their own reasons for either wanting to solve the murders of Calvin and Phillips or to prevent the murders from being solved.

Central believes that all of the essential information for solving these murders will be present in San Francisco at the Anomaly.

In closing, our Pattern Recognition algorithm is suggesting that the events of the December 2 Anomaly are closely linked to the events of Epiphany Night (REDACTED 2012) and the killing of REDACTED and an unknown woman at REDACTED.

We believe we have uncovered the true identity of that woman.

H. Richard Loeb
2017/11/30 16:26:50
Here's the second report by an Intel Analysis group on the upcoming Anomaly -- and apparently -- how it might connect to another momentous night in the history of Ingress... Once again, Agents: I'm making you fill in the blanks...