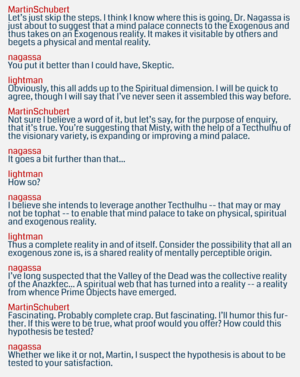 The conclusion of the three wise men's conversation about mind palaces... Part I is here.

MartinSchubert
Let's just skip the steps. I think I know where this is going. Dr. Nagassa is just about to suggest that a mind palace connects to the Exogenous and thus takes on an Exogenous reality. It makes it visitable by others and begets a physical and mental reality.

nagassa
You put it better than I could have, Skeptic.

lightman
Obviously, this all adds up to the Spiritual dimension. I will be quick to agree, though I will say that I've never seen it assembled this way before.

MartinSchubert
Not sure I believe a word of it, but let's say, for the purpose of enquiry, that it's true. You're suggesting that Misty, with the help of a Tecthulhu of the visionary variety, is expanding or improving a mind palace.

nagassa
It goes a bit further than that...

nagassa
I believe she intends to leverage another Tecthulhu -- that may or may not be tophat -- to enable that mind palace to take on physical, spiritual and exogenous reality.

lightman
Thus a complete reality in and of itself. Consider the possibility that all an exogenous zone is, is a shared reality of mentally perceptible origin.

nagassa
I've long suspected that the Valley of the Dead was the collective reality of the Anazktec... A spiritual web that has turned into a reality -- a reality from whence Prime Objects have emerged.

MartinSchubert
Fascinating. Probably complete crap. But fascinating. I'll humor this further. If this were to be true, what proof would you offer? How could this hypothesis be tested?

nagassa
Whether we like it or not, Martin, I suspect the hypothesis is about to be tested to your satisfaction.