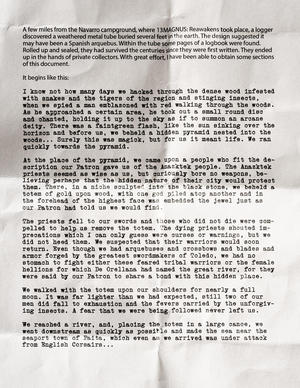 At 13MAGNUS: Reawakens, Hank Johnson read some pages from a document he had recovered which recounts some of Navarro's hidden past. I had asked Hank to share this information with me, and he obliged. Thank you, Hank.

A few miles from where we are sitting now, a logger discovered a weathered metal tube buried several feet in the earth. The design suggested it may have been a spanish arquebus. Within the tube, a few pages of a logbook were found. Rolled up and sealed, they had survived the centuries since they were first written. They ended up in the hands of private collectors. With great effort, I have been able to obtain some sections of this document.

I know not how many days we hacked through the dense wood infested with snakes and the tigers of the region and stinging insects, when we spied a man emblazoned with red walking through the woods. As he approached a certain area, he took out a small round disc and chanted, holding it up to the sky as if to summon an arcane deity. There was a faintgreen flash, like the sun sinking over the horizon and before us, we beheld a hidden pyramid nested into the woods... Surely this was magick, but for us it meant life. We ran quickly towards the pyramid.

At the place of the pyramid, we came upon a people who fit the description our Patron gave us of the Anazktek people. The Anazktek priests seemed as wise as us, but curiously bore no weapons, believing perhaps that the hidden nature of their city would protect them. There, in a niche sculpted into the black stone, we beheld a totem of gold upon wood, with one god piled atop another and in the forehead of the highest face was embedded the jewel just as our Patron had told us we would find.

The priests fell to our swords and those who did not die were compelled to help us remove the totem. The dying priests shouted imprecations which I can only guess were curses or warnings, but we did not heed them. We suspected that their warriors would soon return. Even though we had arquebuses and crossbows and blades and armor forged by the greatest swordmakers of Toledo, we had no stomach to fight either these feared tribal warriors or the female hellions for which De Orellana had named the great river, for they were said by our Patron to share a bond with this hidden place.

We walked with the totem upon our shoulders for nearly a full moon. It was far lighter than we had expected, still two of our men did fall to exhaustion and the fevers carried by the unforgiving insects. A fear that we were being followed never left us.

We reached a river, and, placing the totem in a large canoe, we went downstream as quickly as possible and made the sea near the seaport town of Paita, which even as we arrived was under attack from English Corsairs...

Using cover of the British attack, and as Basques, having no intention to return to Spain to have our treasure, acquired at such great cost, seized by the greedy nobles, we commandeered a fast, lightly armed caravela and forcibly put its crew under our command. As we sailed out, we were simultaneously under fire from the English, our own Spaniards and later, from the trees at the shore, the Female Warriors of the neighboring lands. It seems these fierce warriors too were enraged by our blasphemy upon this totem and the hidden pyramid. Winds favored us and we made good our escape.

Dogged by an English pirate, we sailed north along the coast past Panama and further and further north in search of a place discovered by the Englishman Drake to gather our wits. Eventually, the English turned back...

We passed a great bay and continued north when we were struck by a strange storm of green and blue lightning and frothing tentacles from the sea which seemed to excite the Eye of the Totem. The storm dashed our ship against jagged coastal rocks. We beached our ship by the mouth of a river, which our Leader, Carlos Piedra Aguda, named after his homeland of Navarre. He told us that he had seen a place for us in one of the many visions he had begun to experience since we acquired this strange totem.

After patching the ship and jettisoning all that we did not need, the draft was high enough to move up the river, and reaching a desirable place, we dug a trench and ground the ship to use as a fortress should there be hostiles in the area. We used the Totem Pole as a masthead because Aguda believed that the jewel should look down upon us. Thus it was that our caravel became not only a fortress, but the center of a village. In short time, natives arrived and we began to trade with them.

For several weeks our relations with the natives were harmonious, but this began to change. When one our men, Alvar Cabeza de Coronado did not return to the ship one night, we began searching for him and finally found him, his body pierced by several arrows of the type used by the Anazktek people. We realized that we had been followed to this place from far away and that the Anazktek were inciting the natives against us.

The tribal warriors attacked from the water and the wood in a hail of flaming arrows.

Here ends what I have been able to obtain. I have been told that a few other fragments of this logbook exist, but at this time, I have been unable to bring them to light.

H. Richard Loeb
2017/06/01 15:02:53
At 13MAGNUS: Reawakens, Hank Johnson read some pages from a document he had recovered which recounts some of Navarro's hidden past. I had asked Hank to share this information with me, and he obliged. Thank you, Hank.