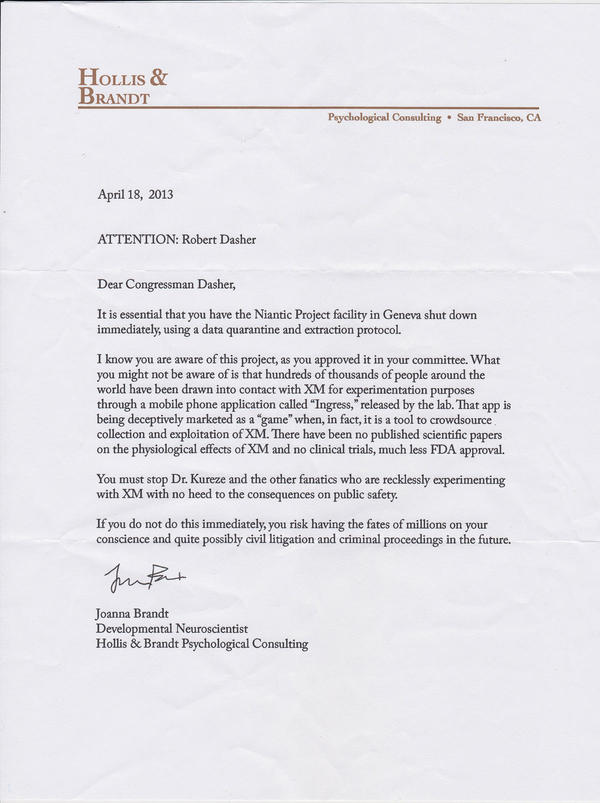 ATTENTION: Robert Dasher
Dear Congressman Dasher,
It is essential that you have the Niantic Project facility in Geneva shut down immediately, using a data quarantine and extraction protocol.

I know you are aware of this project, as you approved it in your committee. What you might not be aware of is that hundreds of thousands of people around the world have been drawn into contact with XM for experimentation purposes through a mobile phone application called "Ingress," released by the lab. That app is being deceptively marketed as a "game" when, in fact, it is a tool to crowdsource . collection and exploitation ofXM. There have been no published scientific papers on the physiological effects of XM and no clinical trials, much less FDA approval.

You must stop Dr. Kureze and the other fanatics who are recklessly experimenting with XM with no heed to the consequences on public safety.

If you do not do this immediately, you risk having the fates of millions on your conscience and quite possibly civil litigation and criminal proceedings in the future.

Niantic Project
2013/04/25 01:01:46
Who set the wheels in motions that led to the sudden and aggressive termination of the Niantic Facility's activities in Geneva?

Today, an important piece of evidence begins to reveal that story.

Read the letter on the board at: http://www.nianticproject.com/?id=sc524a